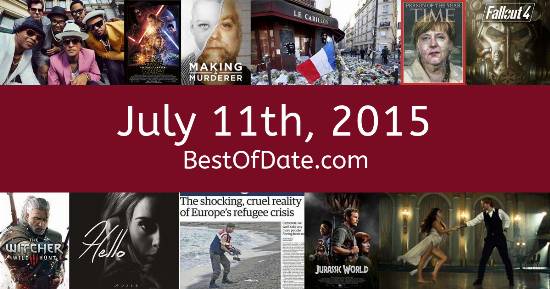 Songs that were on top of the music singles charts in the USA and the United Kingdom on July 11th, 2015.

The date is July 11th, 2015 and it's a Saturday. Anyone born today will have the star sign Cancer. Currently, people are enjoying their weekend.

It's summer, so the temperatures are warmer and the evenings are longer than usual. In America, the song See You Again by Wiz Khalifa featuring Charlie Puth is on top of the singles charts. Over in the UK, Are You with Me by Lost Frequencies is the number one hit song.

Barack Obama is currently the President of the United States and the movie Inside Out is at the top of the Box Office. In the United Kingdom, David Cameron is the current Prime Minister. A social networking website called Vine is extremely popular at the moment.

It's 2015, so the music charts are being dominated by the likes of OMI, Bruno Mars, Ellie Goulding, Adele, Justin Bieber and Hozier. In celebrity news, Ashton Kutcher and Mila Kunis have tied the knot in Los Angeles. The Greek debt crisis is currently a major topic of conversation after the country votes to reject new bailout conditions proposed by the EU and the IMF. It has now become a possibility that Greece may be forced to exit the EU.

Celebrities, historical figures and notable people who were born on the 11th of July.

Barack Obama was the President of the United States on July 11th, 2015.

David Cameron was the Prime Minister of the United Kingdom on July 11th, 2015.