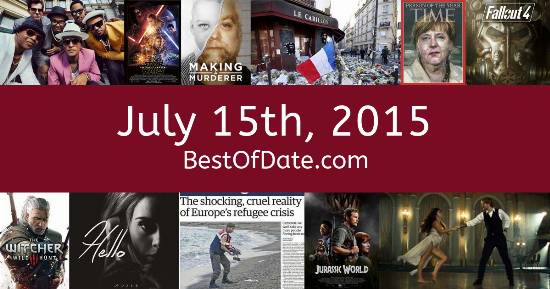 Songs that were on top of the music singles charts in the USA and the United Kingdom on July 15th, 2015.

The date is July 15th, 2015 and it's a Wednesday. Anyone born today will have the star sign Cancer. It's summer, so the temperatures are warmer and the evenings are longer than usual.

In America, the song See You Again by Wiz Khalifa featuring Charlie Puth is on top of the singles charts. Over in the UK, Are You with Me by Lost Frequencies is the number one hit song. Barack Obama is currently the President of the United States and the movie Minions is at the top of the Box Office.

After 17 hours of negotiations, it has been announced that Greece and the EU have finally reached an agreement on a third bailout programme. In soccer, German midfielder Bastian Schweinsteiger has signed for Manchester United. Jess Hayes and Max Morley have just been crowned as winners on the reality TV series Love Island.

An extramarital affairs website called Ashley Madison is currently in the news after hackers announce that they have stolen user data from the site. On TV, people are watching popular shows such as "RuPaul's Drag Race", "The Vampire Diaries", "House of Cards" and "Power". Meanwhile, gamers are playing titles such as "Destiny", "Battlefield Hardline", "Batman: Arkham Knight" and "Rocket League".

Children and teenagers are currently watching television shows such as "Jake and the Never Land Pirates", "Austin & Ally", "Doc McStuffins" and "Dog with a Blog". If you're a kid or a teenager, then you're probably playing with toys such as the PlayStation 4 and the Xbox One.

Barack Obama was the President of the United States on July 15th, 2015.

David Cameron was the Prime Minister of the United Kingdom on July 15th, 2015.