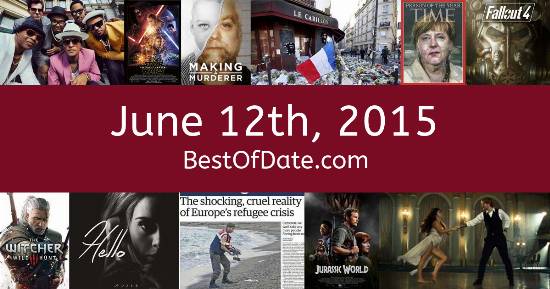 Songs that were on top of the music singles charts in the USA and the United Kingdom on June 12th, 2015.

The date is June 12th, 2015 and it's a Friday. Anyone born today will have the star sign Gemini. Currently, people have "that Friday feeling" and are looking forward to the weekend.

It's summer, so the temperatures are warmer and the evenings are longer than usual. In America, the song Bad Blood by Taylor Swift featuring Kendrick Lamar is on top of the singles charts. Over in the UK, Want to Want Me by Jason Derulo is the number one hit song.

Barack Obama is currently the President of the United States and the movie Spy is at the top of the Box Office. In the United Kingdom, David Cameron is the current Prime Minister. A social networking website called Vine is extremely popular at the moment.

It's 2015, so the music charts are being dominated by the likes of OMI, Bruno Mars, Ellie Goulding, Adele, Justin Bieber and Hozier. FIFA President Sepp Blatter has resigned amid rumors that he may be investigated for fraud and corruption. Barcelona have just won the 2015 UEFA Champions League by defeating Juventus 3-1.

There are cries of censorship on social news aggregation website Reddit after the administrators decide to ban the subreddit /r/fatpeoplehate. Wrestling fans are in mourning following the recent death of WWF legend Dusty Rhodes. On TV, people are watching popular shows such as "Bones", "Suits", "Orange Is the New Black" and "Rick and Morty".

Meanwhile, gamers are playing titles such as "Alien: Isolation", "Battlefield Hardline", "Mortal Kombat X" and "The Witcher 3: Wild Hunt". Children and teenagers are currently watching television shows such as "Mickey Mouse Clubhouse", "Jake and the Never Land Pirates", "Lab Rats: Bionic Island" and "Paw Patrol". If you're a kid or a teenager, then you're probably playing with toys such as the Furby Boom, the PlayStation 4, the Xbox One and Frozen toys.

TV personality. Deceased
Born on June 12th, 1980
She was not alive on this date.

Barack Obama was the President of the United States on June 12th, 2015.

David Cameron was the Prime Minister of the United Kingdom on June 12th, 2015.