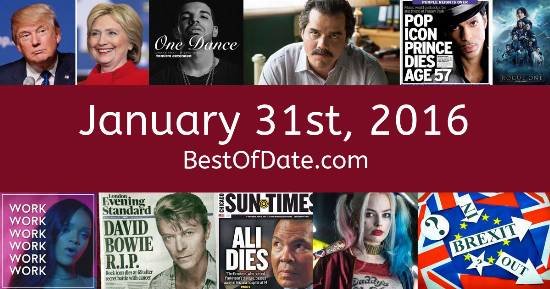 Songs that were on top of the music singles charts in the USA and the United Kingdom on January 31st, 2016:

The date is January 31st, 2016 and it's a Sunday. Anyone born today will have the star sign Aquarius. Currently, people are enjoying their weekend.

In America, the song Sorry by Justin Bieber is on top of the singles charts. Over in the UK, Stitches by Shawn Mendes is the number one hit song. Barack Obama is currently the President of the United States and the movie Kung Fu Panda 3 is at the top of the Box Office.

In the United Kingdom, David Cameron is the current Prime Minister. It's 2016, so the music charts are being dominated by artists such as Drake, Lukas Graham, Sia, Mike Posner, The Chainsmokers and Calvin Harris. Celebrity gossip magazines are reporting that Rob Kardashian and model Blac Chyna are dating.

The World Health Organization has announced that there is currently an outbreak of the Zika virus. In Ireland, DVD rental chain Xtra-Vision has just closed its doors for the last time. Founded in 1979, the company had struggled to compete with the rising popularity of Internet streaming services. Tributes are pouring in for Irish broadcaster Terry Wogan, who has recently passed away due to cancer at the age of 77.

Celebrities, historical figures and noteable people who were born on the 31st of January:

Who was the Prime Minister of the United Kingdom on January 31st, 2016?

Enter your date of birth below to find out how old you were on January 31st, 2016.

Looking for some nostalgia? Here are some Youtube videos relating to January 31st, 2016. Please note that videos are automatically selected by Youtube and that results may vary! Click on the "Load Next Video" button to view the next video in the search playlist. In many cases, you'll find episodes of old TV shows, documentaries, music videos and soap dramas.

Here are some fun statistics about January 31st, 2016.