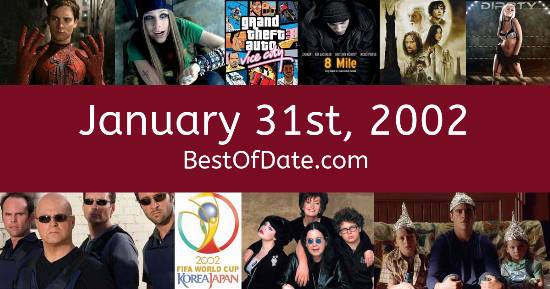 On January 31st, 2002, the following songs were at the top of the music charts in the USA and the UK.

The top "Box Office" movie on this date was the film "The Lord of the Rings: The Fellowship of the Ring".

The date is January 31st, 2002, and it's a Thursday. Anyone born today will have the star sign Aquarius. In America, the song U Got It Bad by Usher is on top of the singles charts.

Over in the UK, Hero by Enrique Iglesias is the number one hit song. George W. Bush Jnr. is currently the President of the United States, and the movie The Lord of the Rings: The Fellowship of the Ring is at the top of the Box Office. In the United Kingdom, Tony Blair is the current Prime Minister.

Meanwhile, the Nokia 3310 is one of the most popular cell phones on the market at the moment. Stores across the world are currently selling a wide range of custom covers for the phone. In technology news, more and more people are beginning to gain access to the Internet. Internet speeds are increasing and MP3 sharing is beginning to threaten the existence of music stores. In Europe, a new currency called the euro (€) has recently been introduced.

A popular software program called LimeWire is currently being used by many people to share music, software and videos. It is also a haven for computer viruses. It's 2002, so the music charts are being dominated by the likes of Ashanti, Nickelback, Nelly, Eminem, Usher, Blu Cantrell, The Calling, Linkin Park and Jennifer Lopez. If you were to travel back to this day, notable figures such as Layne Staley, Left Eye, The British Bulldog and John Gotti would all be still alive.

On TV, people are watching popular shows such as "Everybody Loves Raymond", "The Sopranos", "Andromeda" and "The Office (UK version).". Meanwhile, gamers are playing titles such as "Crazy Taxi", "Final Fantasy X", "Ace Combat 04: Shattered Skies" and "Metal Gear Solid 2: Sons of Liberty". Children and teenagers are currently watching television shows such as "The Simpsons", "Johnny Bravo", "The Amanda Show" and "Malcolm in the Middle".

Popular toys at the moment include the likes of Finger skateboards, Razor (scooter), the PlayStation 2 and the Game Boy Advance.

These are trending news stories and fads that were prevalent at this time. These are topics that would have been in the media on January 31st, 2002.

News stories, pop culture trends, and other events that happened around January 31st, 2002.

Check out our personality summary for people who were born on January 31st, 2002.

Television shows that people were watching in January, 2002.

Popular video games that people were playing in January of 2002.

If you are looking for some childhood nostalgia, then you should check out January 31st, 2008, instead.

Celebrities, historical figures, and other notable people who were born on January 31st.

George W. Bush Jnr. was the President of the United States on January 31st, 2002.

Find out what your age was on January 31st, 2002, by entering your DOB below.
This information is not saved on our server.

Here are some fun statistics about January 31st, 2002.