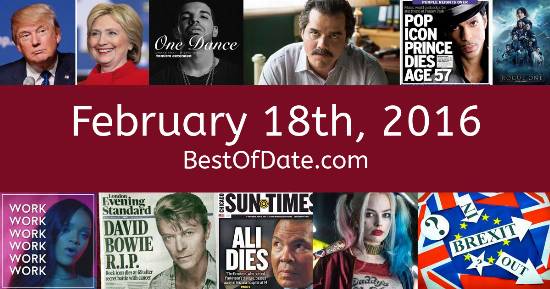 Songs that were on top of the music singles charts in the USA and the United Kingdom on February 18th, 2016.

The date is February 18th, 2016 and it's a Thursday. Anyone born today will have the star sign Aquarius. Valentine's Day of 2016 has just passed.

In America, the song Love Yourself by Justin Bieber is on top of the singles charts. Over in the UK, 7 Years by Lukas Graham is the number one hit song. Barack Obama is currently the President of the United States and the movie Deadpool is at the top of the Box Office.

The 2016 primaries for the Democratic Party and the Republican Party have started as both sides fight it out to choose their nominee for the upcoming presidential election. In Ireland, the campaign for the 2016 Irish general election is taking place. The ruling parties Fine Gael and Labour are hoping to regain power. A video called "Damn Daniel" has recently become a viral hit.

If you were to travel back to this day, notable figures such as Angela Raiola, Rob Ford, Johan Cruyff and Chyna would all be still alive. On TV, people are watching popular shows such as "The Vampire Diaries", "American Horror Story", "Black-ish" and "Making a Murderer". Meanwhile, gamers are playing titles such as "Dying Light", "Lego Jurassic World", "Just Cause 3" and "The Witness".

Children and teenagers are currently watching television shows such as "Horrid Henry", "Agents of S.H.I.E.L.D.", "Sheriff Callie's Wild West" and "Nicky, Ricky, Dicky & Dawn". If you're a kid or a teenager, then you're probably playing with toys such as the PlayStation 4, the Xbox One, Barbie Saddle n Ride and Star Wars BB-8 toy droid.

Barack Obama was the President of the United States on February 18th, 2016.

David Cameron was the Prime Minister of the United Kingdom on February 18th, 2016.

Enter your date of birth below to find out how old you were on February 18th, 2016.

Here are some fun statistics about February 18th, 2016.