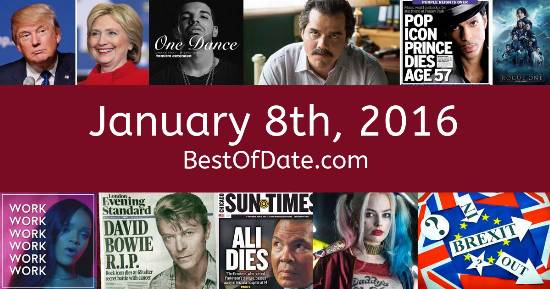 January 8th, 2016 relates to a fictional event in a movie, book, game or television series.

Songs that were on top of the music singles charts in the USA and the United Kingdom on January 8th, 2016.

The movie "Star Wars: The Force Awakens" was at the top of the box office on January 8th, 2016.

The date is January 8th, 2016 and it's a Friday. Anyone born today will have the star sign Capricorn. Currently, people have "that Friday feeling" and are looking forward to the weekend.

The Christmas holiday season is long over, the decorations have been taken down and a sense of normality has returned. In America, the song Hello by Adele is on top of the singles charts. Over in the UK, Love Yourself by Justin Bieber is the number one hit song.

Barack Obama is currently the President of the United States and the movie Star Wars: The Force Awakens is at the top of the Box Office. In the United Kingdom, David Cameron is the current Prime Minister. The first season of "Making a Murderer" has recently been released on Netflix and people are currently debating whether Steven Avery is innocent or not. Some people are creating petitions and demanding that Avery be released.

News outlets are reporting that Glee actor Mark Salling has been arrested on suspicion of possessing child pornography. It's 2016, so the music charts are being dominated by artists such as Drake, Lukas Graham, Sia, Mike Posner, The Chainsmokers and Calvin Harris. In the UK, Eastenders actress Syan Blake and her two children have been found murdered at their home in south-east London.

A notorious Mexican drug lord nicknamed "El Chapo" has just been recaptured by authorities following his escape from prison. If you were to travel back to this day, notable figures such as David Bowie, Angela Raiola, Rob Ford and Johan Cruyff would all be still alive. On TV, people are watching popular shows such as "The Vampire Diaries", "Suits", "Jane the Virgin" and "Making a Murderer".

Meanwhile, gamers are playing titles such as "Minecraft", "Lego Jurassic World", "Batman: Arkham Knight" and "Fallout 4". Kids and teenagers are watching TV shows such as "Austin & Ally", "Henry Danger", "Nicky, Ricky, Dicky & Dawn" and "Game Shakers". Popular toys at the moment include the likes of the PlayStation 4, the Xbox One, Barbie Saddle n Ride and Star Wars BB-8 toy droid.

Barack Obama was the President of the United States on January 8th, 2016.

David Cameron was the Prime Minister of the United Kingdom on January 8th, 2016.

Enter your date of birth below to find out how old you were on January 8th, 2016.

Here are some fun statistics about January 8th, 2016.