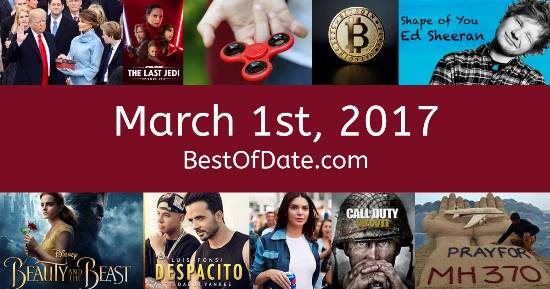 Songs that were on top of the music singles charts in the USA and the United Kingdom on March 1st, 2017.

The date is March 1st, 2017 and it's a Wednesday. Anyone born today will have the star sign Pisces. Spring has started to creep in and the days are beginning to get longer.

It's 2017, so the music charts are being dominated by artists such as Ed Sheeran, Luis Fonsi, Bruno Mars, Kendrick Lamar, The Chainsmokers, Migos, Sam Hunt and Post Malone. Actor Bill Paxton, who starred in movies such as The Terminator, Weird Science, Predator 2 and Aliens, has recently passed away at the age of 61 after suffering a stroke. Parody tweets mocking student athlete's who constantly talk about "being on the grind" and pepper their sentences with emojis are currently popular at the moment.

Kids and teenagers are watching TV shows such as "Dora the Explorer", "Doc McStuffins", "Paw Patrol" and "Henry Danger". Popular toys at the moment include the likes of the PlayStation 4, the Xbox One, Hatchimals and Fidget spinners.

Celebrities, historical figures and notable people who were born on the 1st of March.

Donald Trump was the President of the United States on March 1st, 2017.

Theresa May was the Prime Minister of the United Kingdom on March 1st, 2017.

Enter your date of birth below to find out how old you were on March 1st, 2017.

Here are some fun statistics about March 1st, 2017.

Leave a comment and tell everyone why March 1st, 2017 is important to you.