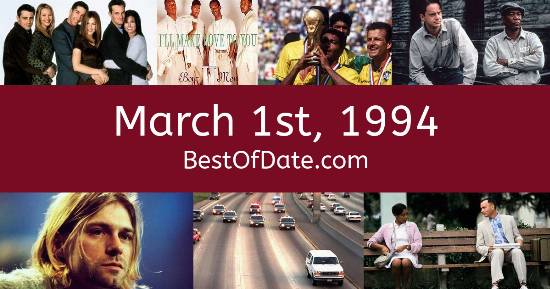 Songs that were on top of the music singles charts in the USA and the United Kingdom on March 1st, 1994.

The date is March 1st, 1994 and it's a Tuesday. Anyone born today will have the star sign Pisces. Spring has started to creep in and the days are beginning to get longer.

In Europe, a war is continuing to rage on in Bosnia and Herzegovina. In the Palestinian city Hebron, 29 people have tragically lost their lives in a shooting massacre. The attacker, an American-Israeli extremist called Baruch Goldstein, was beaten to death by survivors in the aftermath of the shooting. Tributes are currently pouring in for comedian Bill Hicks, who has recently passed away at the age of 32 from pancreatic cancer. Hicks had been diagnosed with the disease in June of 1993.

In Gloucester, England, suspected serial killer Fred West and his wife have been arrested by police. The arrests follow recent excavations at their home in Wests' Cromwell Street. If you were to travel back to this day, notable figures such as John Candy, Kurt Cobain, Richard Nixon and Nicole Brown Simpson would all be still alive. On TV, people are watching popular shows such as "Murder, She Wrote", "Hangin' with Mr. Cooper", "Star Trek: Deep Space Nine" and "Mighty Morphin Power Rangers".

Meanwhile, gamers are playing titles such as "Mortal Kombat II", "Shinobi III: Return of the Ninja Master", "NBA Jam" and "Disney's Aladdin". Kids and teenagers are watching TV shows such as "Thomas the Tank Engine", "The Adventures of Pete & Pete", "Barney & Friends" and "The Nanny". Popular toys at the moment include the likes of Micro Machines, Polly Pocket, Pogs and Nerf Blaster.

If you are looking for some childhood nostalgia, then check out March 1st, 2000 instead.

Bill Clinton was the President of the United States on March 1st, 1994.

John Major was the Prime Minister of the United Kingdom on March 1st, 1994.

Enter your date of birth below to find out how old you were on March 1st, 1994.

Here are some fun statistics about March 1st, 1994.