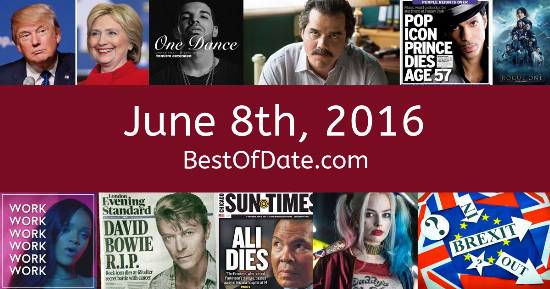 Songs that were on top of the music singles charts in the USA and the United Kingdom on June 8th, 2016.

The movie "Teenage Mutant Ninja Turtles: Out of the Shadows" was at the top of the box office on June 8th, 2016.

The date is June 8th, 2016 and it's a Wednesday. Anyone born today will have the star sign Gemini. It's summer, so the temperatures are warmer and the evenings are longer than usual.

MMA fans are shocked by the sudden death of Kimbo Slice due to heart failure. If you were to travel back to this day, notable figures such as Christina Grimmie, Fidel Castro, Big Syke and George Michael would all be still alive. On TV, people are watching popular shows such as "Homeland", "Once Upon a Time", "Black Mirror" and "Power".

Meanwhile, gamers are playing titles such as "Lego Jurassic World", "Batman: Arkham Knight", "Metal Gear Solid V: The Phantom Pain" and "Rise of the Tomb Raider". Children and teenagers are currently watching television shows such as "Mickey Mouse Clubhouse", "Jake and the Never Land Pirates", "Doc McStuffins" and "The Thundermans". Popular toys at the moment include the likes of the PlayStation 4, the Xbox One, Barbie Saddle n Ride and L.O.L. Surprise!.

Actress. Deceased
Born on June 8th, 1933
She was not alive on this date.

German singer. Deceased
Born on June 8th, 1965
He was not alive on this date.

Barack Obama was the President of the United States on June 8th, 2016.

David Cameron was the Prime Minister of the United Kingdom on June 8th, 2016.

Enter your date of birth below to find out how old you were on June 8th, 2016.

Here are some fun statistics about June 8th, 2016.