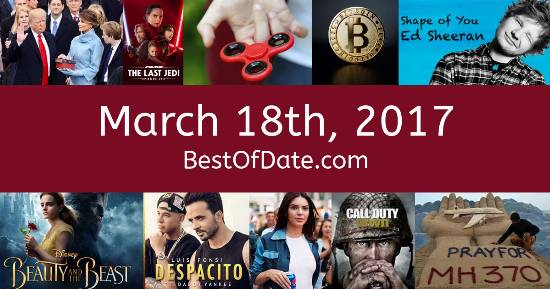 Songs that were on top of the music singles charts in the USA and the United Kingdom on March 18th, 2017.

The date is March 18th, 2017 and it's a Saturday. Anyone born today will have the star sign Pisces. Currently, people are enjoying their weekend.

Spring has arrived and the days have become longer. St. Patrick's Day of 2017 has recently come and gone. The song Shape of You by Ed Sheeran is on top of the singles charts in both the USA and the United Kingdom.

Donald Trump is currently the President of the United States and the movie Kong: Skull Island is at the top of the Box Office. In the United Kingdom, Theresa May is the current Prime Minister. It's 2017, so the music charts are being dominated by artists such as Ed Sheeran, Luis Fonsi, Bruno Mars, Kendrick Lamar, The Chainsmokers, Migos, Sam Hunt and Post Malone.

A new games console called the Nintendo Switch has just been released. Ireland is in mourning following the death of 4 members of the Irish Coast Guard in a helicopter crash. American singer and songwriter Chuck Berry has recently passed away at the age of 90.

If you were to travel back to this day, notable figures such as Chuck Berry, Big Black, Chris Cornell and Roger Moore would all be still alive. On TV, people are watching popular shows such as "Prison Break", "Bones", "Suits" and "Better Call Saul". Meanwhile, gamers are playing titles such as "Cities: Skylines", "Mafia III", "Resident Evil 7: Biohazard" and "Horizon Zero Dawn".

Children and teenagers are currently watching television shows such as "Dora the Explorer", "Horrid Henry", "Doc McStuffins" and "Nicky, Ricky, Dicky & Dawn". Popular toys at the moment include the likes of the PlayStation 4, L.O.L. Surprise!, Hatchimals and the Nintendo Switch.

Donald Trump was the President of the United States on March 18th, 2017.

Theresa May was the Prime Minister of the United Kingdom on March 18th, 2017.

Enter your date of birth below to find out how old you were on March 18th, 2017.