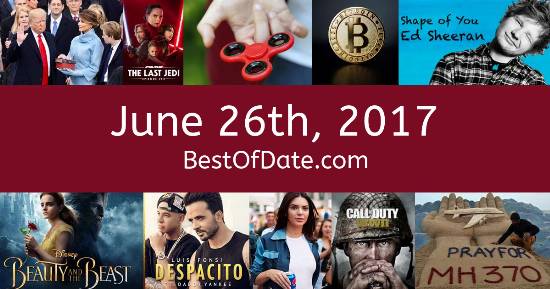 Songs that were on top of the music singles charts in the USA and the United Kingdom on June 26th, 2017.

The movie "Transformers: The Last Knight" was at the top of the box office on June 26th, 2017.

The date is June 26th, 2017 and it's a Monday. Anyone born today will have the star sign Cancer. It's summer, so the temperatures are warmer and the evenings are longer than usual.

The song Despacito (Remix) by Luis Fonsi and Daddy Yankee is on top of the singles charts in both the USA and the United Kingdom. Donald Trump is currently the President of the United States and the movie Transformers: The Last Knight is at the top of the Box Office. In the United Kingdom, Theresa May is the current Prime Minister.

It's 2017, so the music charts are being dominated by artists such as Ed Sheeran, Luis Fonsi, Bruno Mars, Kendrick Lamar, The Chainsmokers, Migos, Sam Hunt and Post Malone. A toy called the "fidget spinner" is becoming a worldwide sensation. A new meme called "Mocking Spongebob" iS cUrReNtLy GoInG vIrAl.

A meme called "The Floor Is..." is going viral at the moment. The app Snapchat has recently released its new "Snap Map" feature. Egyptian footballer Mohamed Salah has joined English side Liverpool.

Snapchat's new "Dancing Hotdog" filter has become the butt of several online jokes. In the UK, the Conservative Party have formed a minority government with the help of the Democratic Unionist Party. On TV, people are watching popular shows such as "Modern Family", "Orange Is the New Black", "Stranger Things" and "13 Reasons Why".

Meanwhile, gamers are playing titles such as "PlayerUnknown's Battlegrounds", "Horizon Zero Dawn", "The Legend of Zelda: Breath of the Wild" and "What Remains of Edith Finch". Children and teenagers are currently watching television shows such as "Dora the Explorer", "Doc McStuffins", "Paw Patrol" and "Henry Danger". Popular toys at the moment include the likes of the PlayStation 4, the Xbox One, L.O.L. Surprise! and Fidget spinners.

Donald Trump was the President of the United States on June 26th, 2017.

Theresa May was the Prime Minister of the United Kingdom on June 26th, 2017.