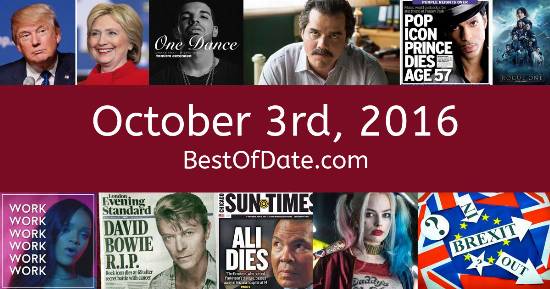 October 3rd, 2016 relates to an event in a movie, book, game or television series:

Songs that were on top of the music singles charts in the USA and the United Kingdom on October 3rd, 2016:

The date is October 3rd, 2016 and it's a Monday. Anyone born today will have the star sign Libra. The summer is long gone. Temperatures have started to become much cooler and the evenings are beginning to get darker.

Fallen leaves have carpeted driveways, lawns, pathways and sidewalks and there's a fresh earthy scent in the ear. The song Closer by The Chainsmokers is on top of the singles charts in both the USA and the United Kingdom. Barack Obama is currently the President of the United States and the movie Miss Peregrine's Home for Peculiar Children is at the top of the Box Office.

A video clip of Danielle Bregoli shouting "Catch me outside, how about that?" is going viral as social media users repeatedly mimic her catch phrase. The "Evil Kermit" meme is currently going viral, as people use the format to describe their battles with their inner conscience. The media is reporting that Kim Kardashian has been robbed at gunpoint in Paris by men disguised as police. The masked men made off with millions of dollars worth of jewellery.

On TV, people are watching popular shows such as "The Vampire Diaries", "The Walking Dead", "Suits" and "Peaky Blinders". Meanwhile, gamers are playing titles such as "Rocket League", "Tom Clancy's The Division", "Pokemon Go" and "PlayerUnknown's Battlegrounds". Children and teenagers are currently watching television shows such as "The Fairly OddParents", "Mickey Mouse Clubhouse", "Jake and the Never Land Pirates" and "Paw Patrol".

If you're a kid or a teenager, then you're probably playing with toys such as "PlayStation 4", "Xbox One", "Star Wars BB-8 toy droid" and "Hatchimals".

Who was the Prime Minister of the United Kingdom on October 3rd, 2016?

Enter your date of birth below to find out how old you were on October 3rd, 2016.

Looking for some nostalgia? Here are some Youtube videos relating to October 3rd, 2016. Please note that videos are automatically selected by Youtube and that results may vary! Click on the "Load Next Video" button to view the next video in the search playlist. In many cases, you'll find episodes of old TV shows, documentaries, music videos and soap dramas.

Here are some fun statistics about October 3rd, 2016.