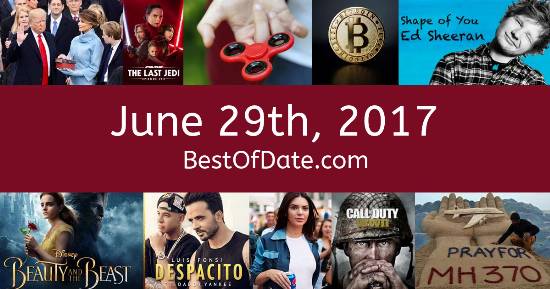 Songs that were on top of the music singles charts in the USA and the United Kingdom on June 29th, 2017:

The date is June 29th, 2017 and it's a Thursday. Anyone born today will have the star sign Cancer. It's summer, so the temperatures are warmer and the evenings are longer than usual.

In America, the song Despacito (Remix) by Luis Fonsi and Daddy Yankee is on top of the singles charts. Over in the UK, Bridge over Troubled Water by Artists for Grenfell is the number one hit song. Donald Trump is currently the President of the United States and the movie Transformers: The Last Knight is at the top of the Box Office.

A new meme called "Mocking Spongebob" iS cUrReNtLy GoInG vIrAl. A meme called "The Floor Is..." is going viral at the moment. The app Snapchat has recently released its new "Snap Map" feature.

Egyptian footballer Mohamed Salah has joined English side Liverpool. Snapchat's new "Dancing Hotdog" filter has become the butt of several online jokes. In the UK, the Conservative Party have formed a minority government with the help of the Democratic Unionist Party.

On TV, people are watching popular shows such as "Modern Family", "Game of Thrones", "Power" and "Better Call Saul". Meanwhile, gamers are playing titles such as "PlayerUnknown's Battlegrounds", "Resident Evil 7: Biohazard", "The Legend of Zelda: Breath of the Wild" and "What Remains of Edith Finch". Kids and teenagers are watching TV shows such as "Dora the Explorer", "Doc McStuffins", "Henry Danger" and "Game Shakers".

If you're a kid or a teenager, then you're probably playing with toys such as "PlayStation 4", "Xbox One", "Fidget spinner" and "Nintendo Switch".

Who was the Prime Minister of the United Kingdom on June 29th, 2017?

Looking for some nostalgia? Here are some Youtube videos relating to June 29th, 2017. Please note that videos are automatically selected by Youtube and that results may vary! Click on the "Load Next Video" button to view the next video in the search playlist. In many cases, you'll find episodes of old TV shows, documentaries, music videos and soap dramas.