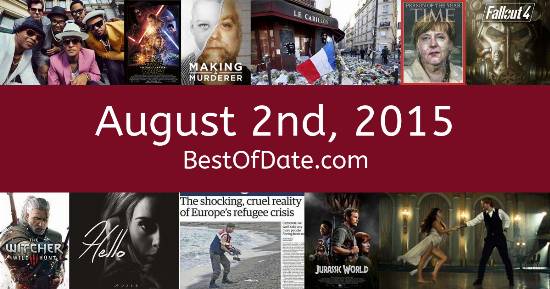 Songs that were on top of the music singles charts in the USA and the United Kingdom on August 2nd, 2015.

The movie "Mission: Impossible - Rogue Nation" was at the top of the box office on August 2nd, 2015.

The date is August 2nd, 2015 and it's a Sunday. Anyone born today will have the star sign Leo. Currently, people are enjoying their weekend.

It's summer, so the temperatures are warmer and the evenings are longer than usual. In America, the song Cheerleader by OMI is on top of the singles charts. Over in the UK, Black Magic by Little Mix is the number one hit song.

It's 2015, so the music charts are being dominated by the likes of OMI, Bruno Mars, Ellie Goulding, Adele, Justin Bieber and Hozier. The new Windows 10 operating system has just been released by Microsoft. Wrestling fans are in mourning following the sudden death of WWF legend "Rowdy" Roddy Piper.

English singer and entertainer Cilla Black has recently passed away at the age of 72. On TV, people are watching popular shows such as "Game of Thrones", "Homeland", "Black Mirror" and "Power". Meanwhile, gamers are playing titles such as "Destiny", "Call of Duty: Advanced Warfare", "The Witcher 3: Wild Hunt" and "Batman: Arkham Knight".

Children and teenagers are currently watching television shows such as "Mickey Mouse Clubhouse", "Paw Patrol", "Girl Meets World" and "Nicky, Ricky, Dicky & Dawn". If you're a kid or a teenager, then you're probably playing with toys such as the PlayStation 4 and the Xbox One.

Barack Obama was the President of the United States on August 2nd, 2015.

David Cameron was the Prime Minister of the United Kingdom on August 2nd, 2015.

Enter your date of birth below to find out how old you were on August 2nd, 2015.

Here are some fun statistics about August 2nd, 2015.