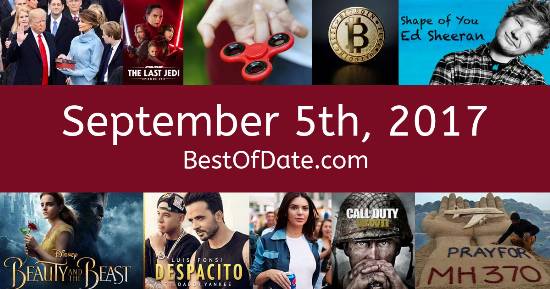 Songs that were on top of the music singles charts in the USA and the United Kingdom on September 5th, 2017.

The movie "The Hitman's Bodyguard" was at the top of the box office on September 5th, 2017.

The date is September 5th, 2017 and it's a Tuesday. Anyone born today will have the star sign Virgo. Schools have started back and autumn has arrived, so temperatures have started to cool and trees are beginning to shed their leaves.

In America, the song Despacito (Remix) by Luis Fonsi and Daddy Yankee is on top of the singles charts. Over in the UK, New Rules by Dua Lipa is the number one hit song. Donald Trump is currently the President of the United States and the movie The Hitman's Bodyguard is at the top of the Box Office.

In the United Kingdom, Theresa May is the current Prime Minister. It's 2017, so the music charts are being dominated by artists such as Ed Sheeran, Luis Fonsi, Bruno Mars, Kendrick Lamar, The Chainsmokers, Migos, Sam Hunt and Post Malone. An Internet meme called "Distracted Boyfriend" is currently going viral.

On TV, people are watching popular shows such as "Game of Thrones", "Homeland", "Peaky Blinders" and "Better Call Saul". Meanwhile, gamers are playing titles such as "What Remains of Edith Finch", "Crash Bandicoot N. Sane Trilogy", "Fortnite" and "Destiny 2". Children and teenagers are currently watching television shows such as "Dora the Explorer", "Doc McStuffins", "Paw Patrol" and "Henry Danger".

Popular toys at the moment include the likes of the PlayStation 4, the Xbox One, Fidget spinners and the Nintendo Switch.

A Spotify playlist of hit songs from 2017. Take a trip back to the peak days of Ed Sheeran, Luis Fonsi, Kendrick Lamar and The Chainsmokers.

Celebrities, historical figures and notable people who were born on the 5th of September.

Donald Trump was the President of the United States on September 5th, 2017.

Theresa May was the Prime Minister of the United Kingdom on September 5th, 2017.

Enter your date of birth below to find out how old you were on September 5th, 2017.

Here are some fun statistics about September 5th, 2017.

Leave a comment and tell everyone why September 5th, 2017 is important to you.