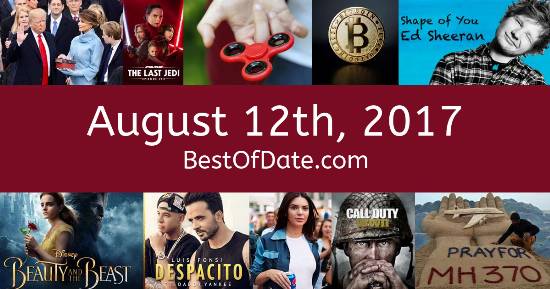 Songs that were on top of the music singles charts in the USA and the United Kingdom on August 12th, 2017.

The date is August 12th, 2017 and it's a Saturday. Anyone born today will have the star sign Leo. Currently, people are enjoying their weekend.

It's summer, so the temperatures are warmer and the evenings are longer than usual. The song Despacito (Remix) by Luis Fonsi and Daddy Yankee is on top of the singles charts in both the USA and the United Kingdom. Donald Trump is currently the President of the United States and the movie The Dark Tower is at the top of the Box Office.

In the United Kingdom, Theresa May is the current Prime Minister. It's 2017, so the music charts are being dominated by artists such as Ed Sheeran, Luis Fonsi, Bruno Mars, Kendrick Lamar, The Chainsmokers, Migos, Sam Hunt and Post Malone. The build-up to the boxing match between Floyd Mayweather and Conor McGregor is currently taking place.

Meanwhile, Ukrainian heavyweight Wladimir Klitschko has officially announced that he is retiring from boxing. A controversial "Unite the Right" rally in Charlottesville, Virginia, has led to the tragic death of Heather Heyer. Heyer's death was caused when a white supremacist called James Alex Fields Jr. deliberately drove his car into a crowd of counter-protesters. On TV, people are watching popular shows such as "American Horror Story", "Orange Is the New Black", "Power" and "Better Call Saul".

Meanwhile, gamers are playing titles such as "Resident Evil 7: Biohazard", "Horizon Zero Dawn", "The Legend of Zelda: Breath of the Wild" and "Fortnite". Kids and teenagers are watching TV shows such as "Doc McStuffins", "Paw Patrol", "Nicky, Ricky, Dicky & Dawn" and "Game Shakers". If you're a kid or a teenager, then you're probably playing with toys such as the PlayStation 4, the Xbox One, Hatchimals and the Nintendo Switch.

Donald Trump was the President of the United States on August 12th, 2017.

Theresa May was the Prime Minister of the United Kingdom on August 12th, 2017.

Enter your date of birth below to find out how old you were on August 12th, 2017.

Leave a comment and tell everyone why August 12th, 2017 is important to you.