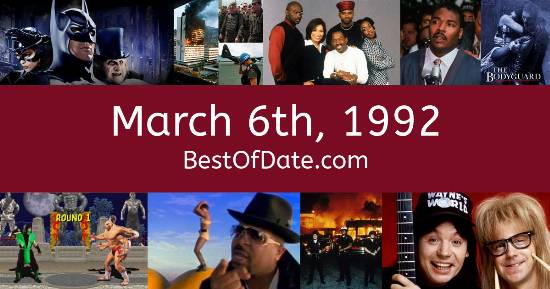 Songs that were on top of the music singles charts in the USA and the United Kingdom on March 6th, 1992:

The date is March 6th, 1992 and it's a Friday. Anyone born today will have the star sign Pisces. Currently, people have "that Friday feeling" and are looking forward to the weekend.

A new sci-fi film called "The Lawnmower Man" has just been released in movie theaters. On TV, people are watching popular shows such as "Sherlock Holmes", "Who's the Boss?", "Teenage Mutant Ninja Turtles" and "Saved by the Bell". Meanwhile, gamers are playing titles such as "Battletoads", "F-16 Combat Pilot", "Civilization" and "Street Fighter II: The World Warrior".

Children and teenagers are currently watching television shows such as "Fireman Sam", "Garfield and Friends", "Noozles" and "Saved by the Bell". Popular toys include the likes of "Game Boy", "The Super Nintendo Entertainment System (SNES)", "Super Soaker (water gun)" and "Pogs".

Who was the Prime Minister of the United Kingdom on March 6th, 1992?

Enter your date of birth below to find out how old you were on March 6th, 1992.

Looking for some nostalgia? Here are some Youtube videos relating to March 6th, 1992. Please note that videos are automatically selected by Youtube and that results may vary! Click on the "Load Next Video" button to view the next video in the search playlist. In many cases, you'll find episodes of old TV shows, documentaries, music videos and soap dramas.

Here are some fun statistics about March 6th, 1992.