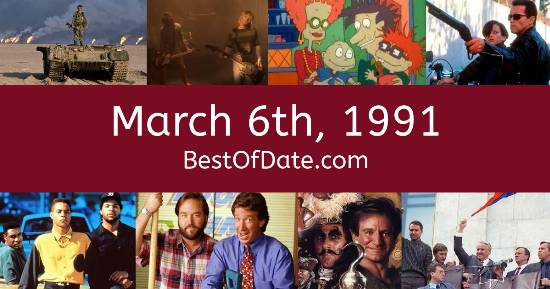 These songs were on top of the music charts in the United States and the United Kingdom on March 6th, 1991.

The movie "Sleeping with the Enemy" was at the top of the Box Office on March 6th, 1991.

The date is March 6th, 1991, and it's a Wednesday. Anyone born today will have the star sign Pisces. Spring has started to creep in and the days are beginning to get longer.

In America, the song Someday by Mariah Carey is on top of the singles charts. Over in the UK, Should I Stay Or Should I Go by The Clash is the number one hit song. George W. Bush Snr. is currently the President of the United States, and the movie Sleeping with the Enemy is at the top of the Box Office.

A civil war is currently taking place in the African country of Rwanda. It's 1991, so the airwaves are being dominated by artists such as Bryan Adams, Michael Jackson, Roxette, R.E.M., Color Me Badd and Paula Abdul. James Brown has just been granted early release from prison. The RnB singer was imprisoned two years ago following a high-speed car chase.

In soccer, 17-year-old winger Ryan Giggs has just made his debut for Manchester United. In boxing, Mike Tyson has defeated Donovan Ruddock. In Europe, the Soviet Union is continuing to dissolve as both Estonia and Latvia vote to leave the USSR.

A controversial video of an African American man called Rodney King being beaten by police has just been released. The footage has sparked racial tensions in Los Angeles. In the Middle East, Operation Desert storm has recently come to an end after a short ground war between US-led forces and the Iraq military. President Bush has declared that the country of Kuwait has been liberated. Meanwhile, an anti-Saddam uprising has started in the Iraqi city of Basra. If you were to travel back to this day, notable figures such as Miles Davis, Freddie Mercury, Robert Reed and Anthony Perkins would all be still alive.

On TV, people are watching popular shows such as "Magnum, P.I.", "MacGyver", "Matlock" and "Twin Peaks". Meanwhile, gamers are playing titles such as "Super Mario Land", "DuckTales", "Railroad Tycoon" and "Castle of Illusion Starring Mickey Mouse". Kids and teenagers are watching TV shows such as "The Real Ghostbusters", "Married... with Children", "Adventures of the Little Koala" and "Doogie Howser, M.D.".

If you're a kid or a teenager, then you're probably playing with toys such as Screwball Scramble, My Little Pony (figures), Koosh Ball and Yo-yo.

These are trending news stories and fads that were prevalent at this time. These are topics that would have been in the media on March 6th, 1991.

Check out our personality summary for people who were born on March 6th, 1991.

Television shows that people were watching in March, 1991.

Popular video games that people were playing in March of 1991.

If you are looking for some childhood nostalgia, then you should check out March 6th, 1997 instead.

Soccer player.
Born on March 6th, 1996
He was born exactly 5 years after this date.

George W. Bush Snr. was the President of the United States on March 6th, 1991.

John Major was the Prime Minister of the United Kingdom on March 6th, 1991.

Enter your date of birth below to find out how old you were on March 6th, 1991.
This information is not transmitted to our server.

Here are some fun statistics about March 6th, 1991.