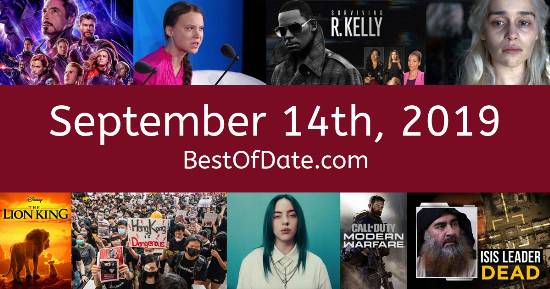 These songs were on top of the music charts in the United States and the United Kingdom on September 14th, 2019.

The movie "It Chapter Two" was at the top of the Box Office on this day.

The date is September 14th, 2019, and it's a Saturday. Anyone born today will have the star sign Virgo. Currently, people are enjoying their weekend.

Schools and colleges are starting again and Autumn has officially arrived. As a result, temperatures are beginning to cool and trees are starting to shed their leaves. In America, the song Truth Hurts by Lizzo is on top of the singles charts. Over in the UK, Take Me Back to London by Ed Sheeran featuring Stormzy is the number one hit song.

Donald Trump is currently the President of the United States, and the movie It Chapter Two is at the top of the Box Office. In the United Kingdom, Boris Johnson is the current Prime Minister. It's 2019, so the music charts are being dominated by artists such as Lil Nas X, Post Malone, Halsey, Billie Eilish and Ariana Grande.

If you were to travel back to this day, notable figures such as Juice Wrld, Derek Acorah, Kobe Bryant and Caroline Flack would all be still alive. On TV, people are watching popular shows such as "The Big Bang Theory", "Modern Family", "American Horror Story" and "Narcos: Mexico". Meanwhile, gamers are playing titles such as "Super Smash Bros. Ultimate", "Resident Evil 2" and "Kingdom Hearts III".

Children and teenagers are currently watching television shows such as "Horrid Henry", "Doc McStuffins", "Agents of S.H.I.E.L.D." and "Henry Danger". Popular toys at the moment include the likes of the PlayStation 4, FurReal Roarin' Tyler, the Star Wars Droid Inventor Kit and the Paw Patrol Lookout Tower Playset.

These are trending news stories and fads that were prevalent at this time. These are topics that would have been in the media on September 14th, 2019.

Check out our personality summary for people who were born on September 14th, 2019.

Television shows that people were watching in September, 2019.

Popular video games that people were playing in September of 2019.

Singer. Deceased
Born on September 14th, 1983
She was not alive on this date.

Donald Trump was the President of the United States on September 14th, 2019.

Boris Johnson was the Prime Minister of the United Kingdom on September 14th, 2019.

Enter your date of birth below to find out how old you were on September 14th, 2019.
This information is not transmitted to our server.

Here are some fun statistics about September 14th, 2019.