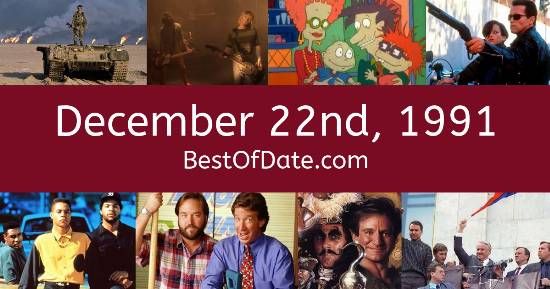 Songs that were on top of the music singles charts in the USA and the United Kingdom on December 22nd, 1991.

The movie "Star Trek VI: The Undiscovered Country" was at the top of the box office on December 22nd, 1991.

The date is December 22nd, 1991 and it's a Sunday. Anyone born today will have the star sign Capricorn. Currently, people are enjoying their weekend.

Christmas Day of 1991 is fast approaching and the excitement is building. Department stores are thronged with Christmas shoppers. In America, the song Black Or White by Michael Jackson is on top of the singles charts. Over in the UK, Bohemian Rhapsody / These Are The Days Of Our Lives by Queen is the number one hit song.

George W. Bush Snr. is currently the President of the United States and the movie Star Trek VI: The Undiscovered Country is at the top of the Box Office. In the United Kingdom, John Major is the current Prime Minister. In fashion, many of the trends from the late 80s are still popular. Colored tights, denim overalls, leotards, flannel shirts and shoulder pads are all fashionable at the moment.

In Europe, the Soviet Union is coming to an end as the leaders of Russia, Belarus and Ukraine agree to dissolve the union. The film Hook, starring Robin Williams, is currently showing in movie theaters. On TV, people are watching popular shows such as "In the Heat of the Night", "Seinfeld", "Blossom" and "Clarissa Explains It All".

Meanwhile, gamers are playing titles such as "Duck Hunt", "F-16 Combat Pilot", "The Legend of Zelda: A Link to the Past" and "Super Castlevania IV". Kids and teenagers are watching TV shows such as "Married... with Children", "Teenage Mutant Ninja Turtles", "Doug" and "Home Improvement". Popular toys at the moment include the likes of the Easy-Bake Oven, Sylvanian Families, Micro Machines and Yo-yo.

If you are looking for some childhood nostalgia, then check out December 22nd, 1997 instead.

Celebrities, historical figures and notable people who were born on the 22nd of December.

George W. Bush Snr. was the President of the United States on December 22nd, 1991.

John Major was the Prime Minister of the United Kingdom on December 22nd, 1991.

Enter your date of birth below to find out how old you were on December 22nd, 1991.

Here are some fun statistics about December 22nd, 1991.