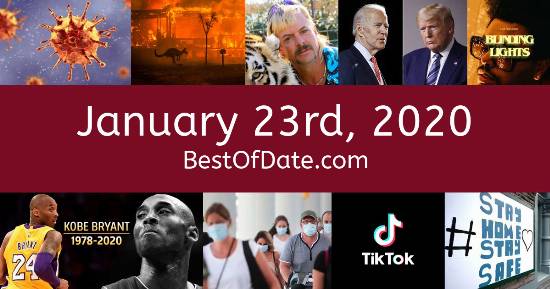 On January 23rd, 2020, the following songs were at the top of the music charts in the USA and the UK.

The following comments about January 23rd, 2020 were written by our visitors.

It was around this time that I started hearing about the strange virus that was spreading in China. At the time, I believed that it was just another outbreak that would eventually die out. Little did I know that it would spread across the globe and disrupt everyone's life.
Posted on January 23rd, 2023 09:01

The date is January 23rd, 2020, and it's a Thursday. Anyone born today will have the star sign Aquarius. In America, the song The Box by Roddy Ricch is on top of the singles charts.

News reports about an outbreak of a new respiratory virus in China are continuing to emerge. However, most people in the western world are not worried. Many believe that the media is over-hyping the outbreak and that it will eventually peter out like SARS, Ebola and Zika did in the past. If you were to travel back to this day, notable figures such as Kobe Bryant, Caroline Flack, Pop Smoke and Hosni Mubarak would all be still alive. On TV, people are watching popular shows such as "The Walking Dead", "Peaky Blinders", "Stranger Things" and "The Witcher".

Meanwhile, gamers are playing titles such as "Kingdom Hearts III", "Call of Duty: Modern Warfare", "Death Stranding" and "Pokémon Sword and Shield". Kids and teenagers are watching TV shows such as "Horrid Henry", "Agents of S.H.I.E.L.D." and "The Loud House". Popular toys at the moment include the likes of the PlayStation 4 and the Xbox One.

These are trending news stories and fads that were prevalent at this time. These are topics that would have been in the media on January 23rd, 2020.

News stories, pop culture trends, and other events that happened around January 23rd, 2020.

Check out our personality summary for people who were born on January 23rd, 2020.

Rapper. Deceased
Born on January 23rd, 1998
He was not alive on this date.

Donald Trump was the President of the United States on January 23rd, 2020.

Find out what your age was on January 23rd, 2020, by entering your DOB below.
This information is not saved on our server.

Here are some fun statistics about January 23rd, 2020.