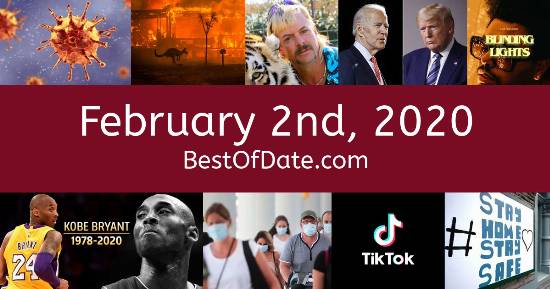 Songs that were on top of the music singles charts in the USA and the United Kingdom on February 2nd, 2020.

The date is February 2nd, 2020, and it's a Sunday. Anyone born today will have the star sign Aquarius. Currently, people are enjoying their weekend.

In America, the song The Box by Roddy Ricch is on top of the singles charts. Over in the UK, Godzilla by Eminem featuring Juice Wrld is the number one hit song. Donald Trump is currently the President of the United States, and the movie Bad Boys for Life is at the top of the Box Office.

In the United Kingdom, Boris Johnson is the current Prime Minister. News about an outbreak of a new respiratory virus called Covid-19 is continuing to dominate headlines. Although most people in the western world originally believed that the media was over-hyping the outbreak, it is now beginning to slowly dawn on everyone that it could be serious. If you were to travel back to this day, notable figures such as Caroline Flack, Pop Smoke, Hosni Mubarak and Kenny Rogers would all be still alive.

On TV, people are watching popular shows such as "Grey's Anatomy", "Modern Family", "Homeland" and "Black-ish". Meanwhile, gamers are playing titles such as "Call of Duty: Modern Warfare", "Death Stranding" and "Pokémon Sword and Shield". Kids and teenagers are watching TV shows such as "Horrid Henry", "Agents of S.H.I.E.L.D." and "The Loud House".

These are trending news stories and fads that were prevalent at this time. These are topics that would have been in the media on February 2nd, 2020.

Check out our personality summary for people who were born on February 2nd, 2020.

Television shows that people were watching in February, 2020.

Popular video games that people were playing in February of 2020.

Philosopher. Deceased
Born on February 2nd, 1905
She was not alive on this date.

Actor. Deceased
Born on February 2nd, 1947
He was not alive on this date.

Actress. Deceased
Born on February 2nd, 1947
She was not alive on this date.

Donald Trump was the President of the United States on February 2nd, 2020.

Boris Johnson was the Prime Minister of the United Kingdom on February 2nd, 2020.

Enter your date of birth below to find out how old you were on February 2nd, 2020.
This information is not transmitted to our server.

Here are some fun statistics about February 2nd, 2020.