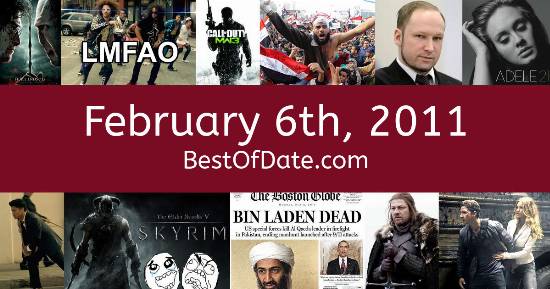 Songs that were on top of the music singles charts in the USA and the United Kingdom on February 6th, 2011.

The movie "The Roommate" was at the top of the box office on February 6th, 2011.

The date is February 6th, 2011 and it's a Sunday. Anyone born today will have the star sign Aquarius. Currently, people are enjoying their weekend.

In America, the song Hold It Against Me by Britney Spears is on top of the singles charts. Over in the UK, We R Who We R by Kesha is the number one hit song. Barack Obama is currently the President of the United States and the movie The Roommate is at the top of the Box Office.

In soccer, Fernando Torres has transferred to Chelsea in a £50 million deal. Meanwhile, Liverpool have replaced Torres by purchasing Andy Carroll from Newcastle for £35. They have also secured the signing of Ajax striker Luis Suarez. Protesters in Egypt are continuing to take to the streets in defiance of president Hosni Mubarak. The Green Bay Packers have won the Super Bowl by defeating the Pittsburgh Steelers at the Cowboys Stadium in Arlington, Texas. Pop star Christina Aguilera has caused controversy after omitting a few lines while singing the US national anthem at the game.

On TV, people are watching popular shows such as "Desperate Housewives", "Bones", "Sons of Anarchy" and "Jersey Shore". Meanwhile, gamers are playing titles such as "Farmville", "God of War III", "Civilization V" and "Fallout: New Vegas". Kids and teenagers are watching TV shows such as "Curious George", "Wizards of Waverly Place", "Glee" and "Good Luck Charlie".

If you are looking for some childhood nostalgia, then check out February 6th, 2017 instead.

US President. Deceased
Born on February 6th, 1911
He was not alive on this date.

Barack Obama was the President of the United States on February 6th, 2011.

David Cameron was the Prime Minister of the United Kingdom on February 6th, 2011.

Enter your date of birth below to find out how old you were on February 6th, 2011.

Here are some fun statistics about February 6th, 2011.

Have something to say about February 6th, 2011?