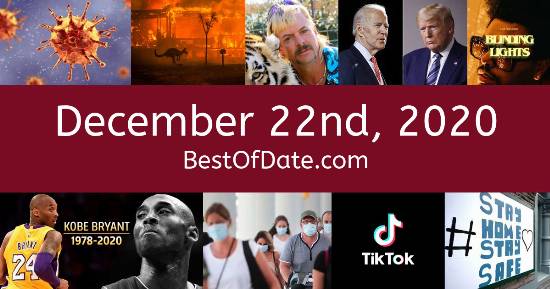 These songs were on top of the music charts in the United States and the United Kingdom on December 22nd, 2020.

The top "Box Office" movie on this date was the film "Monster Hunter".

The date is December 22nd, 2020, and it's a Tuesday. Anyone born today will have the star sign Capricorn. Christmas Day of 2020 is fast approaching and the excitement is building. Department stores are thronged with Christmas shoppers.

The song All I Want for Christmas Is You by Mariah Carey is on top of the singles charts in both the USA and the United Kingdom. Donald Trump is currently the President of the United States, and the movie Monster Hunter is at the top of the Box Office. In the United Kingdom, Boris Johnson is the current Prime Minister.

If you were to travel back to this day, notable figures such as Larry King, Dustin Diamond, Rush Limbaugh and Paul Ritter would all be still alive. On TV, people are watching popular shows such as "The Walking Dead", "Peaky Blinders", "Stranger Things" and "Narcos: Mexico". Children and teenagers are currently watching television shows such as "Horrid Henry", "Agents of S.H.I.E.L.D." and "The Loud House".

If you're a kid or a teenager, then you're probably playing with toys such as the Xbox Series X and the PlayStation 5.

These are trending news stories and fads that were prevalent at this time. These are topics that would have been in the media on December 22nd, 2020.

Check out our personality summary for people who were born on December 22nd, 2020.

Donald Trump was the President of the United States on December 22nd, 2020.

Enter your date of birth below to find out how old you were on December 22nd, 2020.
This information is not transmitted to our server.

Here are some fun statistics about December 22nd, 2020.