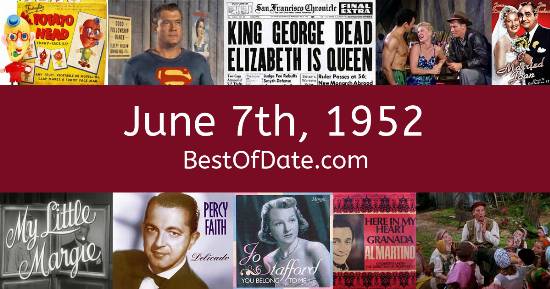 The best-selling single on June 7th, 1952 was "Wheel of Fortune" by Kay Starr.

The date is June 7th, 1952 and it's a Saturday. Anyone born today will have the star sign Gemini. Currently, people are enjoying their weekend.

It's summer, so the temperatures are warmer and the evenings are longer than usual. In music, the song "Wheel of Fortune" by Kay Starr is the best-selling record at the moment. Harry S. Truman is currently the President of the United States and Winston Churchill is the Prime Minister of the United Kingdom.

On TV, people are watching popular shows such as "The Gene Autry Show", "You Bet Your Life", "Sky King" and "I Love Lucy". Children and teenagers are currently watching television shows such as "Looney Tunes", "Tom and Jerry" and "Crusader Rabbit". If you're a kid or a teenager, then you're probably playing with toys such as Mr. Potato Head.

Children's cartoons and Teen TV shows that were being aired on this date in 1952.

If you are looking for some childhood nostalgia, then check out June 7th, 1958 instead.

Celebrities, historical figures and notable people who were born on the 7th of June.

Harry S. Truman was the President of the United States on June 7th, 1952.

Winston Churchill was the Prime Minister of the United Kingdom on June 7th, 1952.

Enter your date of birth below to find out how old you were on June 7th, 1952.

Here are some fun statistics about June 7th, 1952.