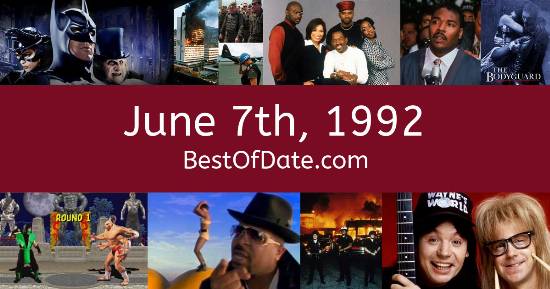 These songs were on top of the music charts in the United States and the United Kingdom on June 7th, 1992.

The date is June 7th, 1992, and it's a Sunday. Anyone born today will have the star sign Gemini. Currently, people are enjoying their weekend.

It's summer, so the temperatures are warmer and the evenings are longer than usual. In America, the song Jump by Kriss Kross is on top of the singles charts. Over in the UK, Please Don't Go by KWS is the number one hit song.

George W. Bush Snr. is currently the President of the United States, and the movie Lethal Weapon 3 is at the top of the Box Office. In the United Kingdom, John Major is the current Prime Minister. Texting is not a thing yet. Instead, people are using landline phones and pagers. Furthermore, the vast majority of people still have no idea what "the Internet" is.

In Europe, a war is continuing to rage on in Bosnia and Herzegovina. Arkansas Governor Bill Clinton has become presidential nominee for the Democratic Party after winning the primary election in California. He will now will face off against Republican incumbent George H. W. Bush in this year's presidential election. Soccer fans are looking forward to the start of the 1992 UEFA European Football Championship, which is due to start next week in Sweden.

A new autobiography about Diana, Princess of Wales, is causing a stir. The book has revealed that Diana's marriage to Prince Charles nearly drove her to suicide and that the couple had affairs with other people. If you were to travel back to this day, notable figures such as Anthony Perkins, Audrey Hepburn, Thurgood Marshall and Andre the Giant would all be still alive. On TV, people are watching popular shows such as "Knots Landing", "Star Trek: The Next Generation", "Roseanne" and "Step by Step".

Meanwhile, gamers are playing titles such as "Paperboy", "The Simpsons: Bart vs. the Space Mutants", "The Legend of Zelda: A Link to the Past" and "Yoshi". Kids and teenagers are watching TV shows such as "Thomas the Tank Engine", "Count Duckula", "The Simpsons" and "Taz-Mania". If you're a kid or a teenager, then you're probably playing with toys such as Screwball Scramble, the Ghostbusters Proton Pack, the Game Boy and Nerf Blaster.

These are trending news stories and fads that were prevalent at this time. These are topics that would have been in the media on June 7th, 1992.

News stories and other events that happened around June 7th, 1992.

Check out our personality summary for people who were born on June 7th, 1992.

If you are looking for some childhood nostalgia, then you should check out June 7th, 1998 instead.

George W. Bush Snr. was the President of the United States on June 7th, 1992.

John Major was the Prime Minister of the United Kingdom on June 7th, 1992.

Find out what your age was on June 7th, 1992, by entering your DOB below.
This information is not saved on our server.

Here are some fun statistics about June 7th, 1992.