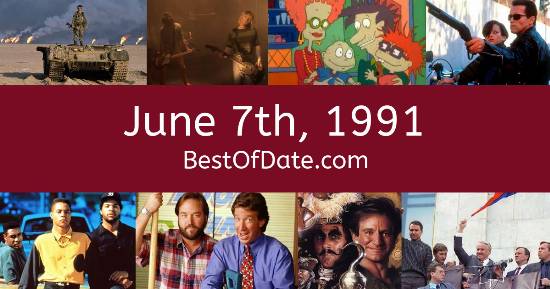 These songs were on top of the music charts in the United States and the United Kingdom on June 7th, 1991.

The date is June 7th, 1991, and it's a Friday. Anyone born today will have the star sign Gemini. Currently, people have "that Friday feeling" and are looking forward to the weekend.

It's summer, so the temperatures are warmer and the evenings are longer than usual. In America, the song More Than Words by Extreme is on top of the singles charts. Over in the UK, I Wanna Sex You Up by Color Me Badd is the number one hit song.

George W. Bush Snr. is currently the President of the United States, and the movie City Slickers is at the top of the Box Office. In the United Kingdom, John Major is the current Prime Minister. Texting is not a thing yet. Instead, people are using landline phones and pagers. Furthermore, the vast majority of people still have no idea what "the Internet" is.

In Europe, the Soviet Union is continuing to dissolve. A new "alternative" rock band called The Smashing Pumpkins have released their debut album "Gish". In celebrity news, actress Roseanne Barr Arnold and Tom Arnold have just been remarried.

In Japan, the eruption of Mount Unzen on the island of Kyushu has left 43 people dead. Meanwhile, in South Africa, the policy of apartheid has officially been ended. Around 200,000 people have attended a parade in Washington D.C. to welcome over 8,000 US troops home from the Gulf War.

If you were to travel back to this day, notable figures such as Miles Davis, Freddie Mercury, Robert Reed and Anthony Perkins would all be still alive. On TV, people are watching popular shows such as "Only Fools and Horses", "MacGyver", "The Wonder Years" and "Roseanne". Meanwhile, gamers are playing titles such as "Duck Hunt", "Paperboy", "Golden Axe" and "The Simpsons: Bart vs. the Space Mutants".

Children and teenagers are currently watching television shows such as "Thomas the Tank Engine", "Pingu", "Chip 'n' Dale's Rescue Rangers" and "Doogie Howser, M.D.". If you're a kid or a teenager, then you're probably playing with toys such as Micro Machines, Teenage Mutant Hero Turtles figures, the Game Boy and the Sega Genesis / Mega Drive.

These are trending news stories and fads that were prevalent at this time. These are topics that would have been in the media on June 7th, 1991.

News stories and other events that happened around June 7th, 1991.

Check out our personality summary for people who were born on June 7th, 1991.

If you are looking for some childhood nostalgia, then you should check out June 7th, 1997 instead.

George W. Bush Snr. was the President of the United States on June 7th, 1991.

John Major was the Prime Minister of the United Kingdom on June 7th, 1991.

Find out what your age was on June 7th, 1991, by entering your DOB below.
This information is not saved on our server.

Here are some fun statistics about June 7th, 1991.