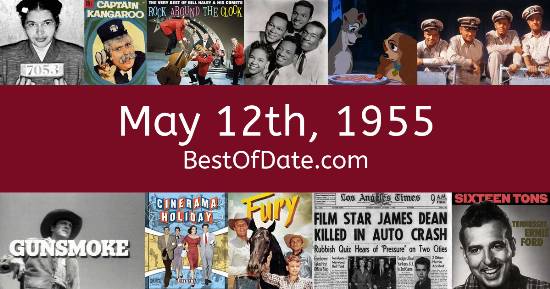 The date is May 12th, 1955 and it's a Thursday. Anyone born today will have the star sign Taurus. The summer of 1955 has finally arrived. The weather has warmed up and the evenings are brighter than usual.

In music, the song "Cherry Pink (and Apple Blossom White)" by Pérez Prado and His Orchestra is the best-selling record at the moment. Dwight David Eisenhower is currently the President of the United States and Sir Anthony Eden is the Prime Minister of the United Kingdom. It's 1955, so radio stations and jukeboxes are playing songs from artists such as Perez Prado, Bill Haley & His Comets, Mitch Miller, Roger Williams, Les Baxter, Bill Hayes, The Four Aces, The McGuire Sisters and Pat Boone.

In fashion, women are sporting chemise dresses, sheaths, sack dresses and straight-cut suits. Short boxy jackets and shift dresses are also beginning to become popular. Meanwhile, a lot of men are sporting a "Teddy Boy" style that involves leather jackets, greased-back hair, extremely narrow trousers and velvet-collared jackets. Men are also wearing formal suits as daywear. Tailfins on cars are extremely popular at the moment. The design looks futuristic, almost like a rocket or the twin rudders on the back of an airplane. On TV, people are watching popular shows such as "The Gene Autry Show", "I Love Lucy", "The Danny Thomas Show" and "Annie Oakley".

Children and teenagers are currently watching television shows such as "Tom and Jerry", "Adventures of Superman", "Lassie" and "Father Knows Best". If you're a kid or a teenager, then you're probably playing with toys such as "Mr. Potato Head".

Notable events that occurred around May 12th, 1955:

Who was the Prime Minister of the United Kingdom on May 12th, 1955?

Looking for some nostalgia? Here are some Youtube videos relating to May 12th, 1955. Please note that videos are automatically selected by Youtube and that results may vary! Click on the "Load Next Video" button to view the next video in the search playlist. In many cases, you'll find episodes of old TV shows, documentaries, music videos and soap dramas.