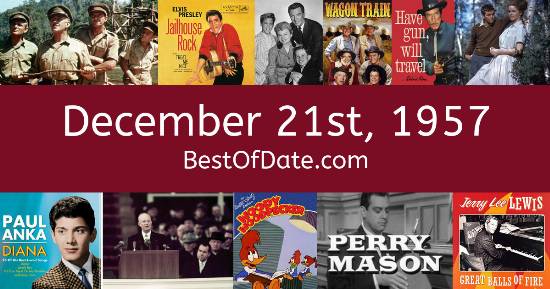 The best-selling single on December 21st, 1957 was "Jailhouse Rock" by Elvis Presley.

The date is December 21st, 1957, and it's a Saturday. Anyone born today will have the star sign Sagittarius. Currently, people are enjoying their weekend.

Christmas Day of 1957 is fast approaching and the excitement is building. Department stores are thronged with Christmas shoppers. In music, the song "Jailhouse Rock" by Elvis Presley is the best-selling record at the moment. Dwight David Eisenhower is currently the President of the United States, and Harold Macmillan is the Prime Minister of the United Kingdom.

On TV, people are watching popular shows such as "The Ed Sullivan Show", "You Bet Your Life", "Maverick" and "Decoy". Children and teenagers are currently watching television shows such as "Adventures of Pow Wow", "Mighty Mouse Playhouse", "Colonel Bleep" and "The Ruff and Reddy Show". If you're a kid or a teenager, then you're probably playing with toys such as Dimestore soldiers, Foto-Electric Baseball, Matchbox toy cars and the Frisbee.

These are trending news stories and fads that were prevalent at this time. These are topics that would have been in the media on December 21st, 1957.

News stories and other events that happened around December 21st, 1957.

Check out our personality summary for people who were born on December 21st, 1957.

Television shows that people were watching in December, 1957.

If you are looking for some childhood nostalgia, then you should check out December 21st, 1963 instead.

French president.
Born on December 21st, 1977
He was born exactly 20 years after this date.

Youtube personality. Deceased
Born on December 21st, 1980
He was born exactly 23 years after this date.

Soccer player.
Born on December 21st, 1996
He was born exactly 39 years after this date.

Dwight David Eisenhower was the President of the United States on December 21st, 1957.

Harold Macmillan was the Prime Minister of the United Kingdom on December 21st, 1957.

Find out what your age was on December 21st, 1957, by entering your DOB below.
This information is not saved on our server.

Here are some fun statistics about December 21st, 1957.