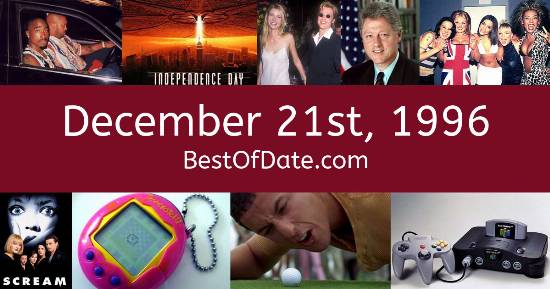 Songs that were on top of the music singles charts in the USA and the United Kingdom on December 21st, 1996.

The movie "Beavis and Butt-Head Do America" was at the top of the box office on December 21st, 1996.

The date is December 21st, 1996 and it's a Saturday. Anyone born today will have the star sign Sagittarius. Currently, people are enjoying their weekend.

Christmas Day of 1996 is fast approaching and the excitement is building. Department stores are thronged with Christmas shoppers. In America, the song Un-break My Heart by Toni Braxton is on top of the singles charts. Over in the UK, Knockin' On Heaven's Door by Dunblane is the number one hit song.

Bill Clinton is currently the President of the United States and the movie Beavis and Butt-Head Do America is at the top of the Box Office. In the United Kingdom, John Major is the current Prime Minister. In fashion, "grunge" clothing has declined in popularity and women are beginning to wear form-fitting outfits such as slip dresses and pencil skirts. Movies such as Clueless and The Craft have popularized the "sexy school girl" look.

Meanwhile, in technology news, CDs have become the dominant format for music. People are buying CD players and the portable CD players such as the "Discman". As a result, the older cassette tape format is continuing to decline in sales. It's 1996, so radio stations are being dominated by the likes of Mariah Carey, Boyz II Men, Céline Dion, Oasis, Mark Morrison, Spice Girls, Los Del Rio, 2Pac and Coolio. A new dance craze called the "Macarena" is all the rage at the moment.

A new video game console called the "Nintendo 64" has just been released. It is currently competing against the Sony PlayStation and the Sega Saturn. On TV, people are watching popular shows such as "Party of Five", "The Secret World of Alex Mack", "Father Ted" and "Xena: Warrior Princess". Meanwhile, gamers are playing titles such as "Twisted Metal", "Duke Nukem 3D", "Crash Bandicoot" and "Command & Conquer: Red Alert".

Kids and teenagers are watching TV shows such as "Home Improvement", "The Nanny", "The Secret World of Alex Mack" and "Sabrina the Teenage Witch". Popular toys at the moment include the likes of Jenga, Lego Pirates, Tickle Me Elmo and the Nintendo 64.

If you are looking for some childhood nostalgia, then check out December 21st, 2002 instead.

Bill Clinton was the President of the United States on December 21st, 1996.

John Major was the Prime Minister of the United Kingdom on December 21st, 1996.

Enter your date of birth below to find out how old you were on December 21st, 1996.

Here are some fun statistics about December 21st, 1996.