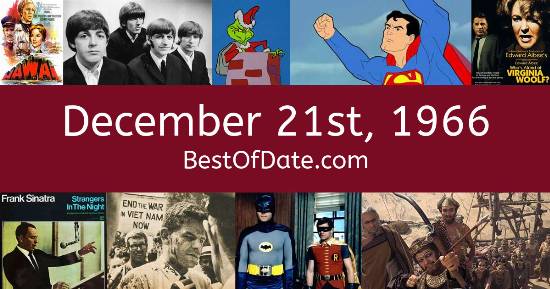 These songs were on top of the music charts in the United States and the United Kingdom on December 21st, 1966.

The top "Box Office" movie on this date was the film "Hawaii".

The date is December 21st, 1966, and it's a Wednesday. Anyone born today will have the star sign Sagittarius. Christmas Day of 1966 is fast approaching and the excitement is building. Department stores are thronged with Christmas shoppers.

In America, the song Winchester Cathedral by New Vaudeville Band is on top of the singles charts. Over in the UK, Green Green Grass Of Home by Tom Jones is the number one hit song. Lyndon Baines Johnson is currently the President of the United States, and the movie Hawaii is at the top of the Box Office.

If you were to travel back to this day, notable figures such as Jayne Mansfield, Che Guevara and Otis Redding would all be still alive. On TV, people are watching popular shows such as "Gunsmoke", "Danger Man", "The Andy Griffith Show" and "Gilligan's Island". Kids and teenagers are watching TV shows such as "The Bugs Bunny Show", "Hoppity Hooper", "Thunderbirds" and "Atom Ant".

If you're a kid or a teenager, then you're probably playing with toys such as Mouse Trap, the Easy-Bake Oven, Rock 'Em Sock 'Em Robots and Barrel of Monkeys.

These are trending news stories and fads that were prevalent at this time. These are topics that would have been in the media on December 21st, 1966.

News stories, pop culture trends, and other events that happened around December 21st, 1966.

Check out our personality summary for people who were born on December 21st, 1966.

If you are looking for some childhood nostalgia, then you should check out December 21st, 1972, instead.

Celebrities, historical figures, and other notable people who were born on December 21st.

French president.
Born on December 21st, 1977
He was born exactly 11 years after this date.

Youtube personality. Deceased
Born on December 21st, 1980
He was born exactly 14 years after this date.

Soccer player.
Born on December 21st, 1996
He was born exactly 30 years after this date.

Lyndon Baines Johnson was the President of the United States on December 21st, 1966.

Find out what your age was on December 21st, 1966, by entering your DOB below.
This information is not saved on our server.

Here are some fun statistics about December 21st, 1966.