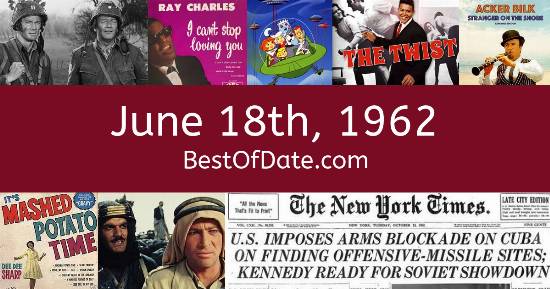 Songs that were on top of the music singles charts in the USA and the United Kingdom on June 18th, 1962.

The date is June 18th, 1962 and it's a Monday. Anyone born today will have the star sign Gemini. It's summer, so the temperatures are warmer and the evenings are longer than usual.

In America, the song I Can't Stop Loving You by Ray Charles is on top of the singles charts. Over in the UK, Good Luck Charm by Elvis Presley is the number one hit song. John Fitzgerald Kennedy is currently the President of the United States and Harold Macmillan is the Prime Minister of the United Kingdom.

In fashion, many of the trends from the late 1950s are still popular. Women are wearing tailored skirts, short boxy jackets and shift dresses. Trousers are also becoming popular amongst women. Meanwhile, men are wearing polo shirts, argyle socks, sweater vests, loafers and harrington jackets. Because it's 1962, radio stations are playing hit songs from music artists such as Ray Charles, The Four Seasons, Elvis Presley, Chubby Checker, Bobby Vinton and Shelley Fabares. On TV, people are watching popular shows such as "Wagon Train", "77 Sunset Strip", "Bonanza" and "The Many Loves of Dobie Gillis".

Children and teenagers are currently watching television shows such as "Looney Tunes", "Heckle and Jeckle", "The Many Loves of Dobie Gillis" and "Davey and Goliath". If you're a kid or a teenager, then you're probably playing with toys such as Crater Critters, Etch A Sketch, Ken (doll) and Tammy (doll).

John Fitzgerald Kennedy was the President of the United States on June 18th, 1962.

Harold Macmillan was the Prime Minister of the United Kingdom on June 18th, 1962.

Leave a comment and tell everyone why June 18th, 1962 is important to you.