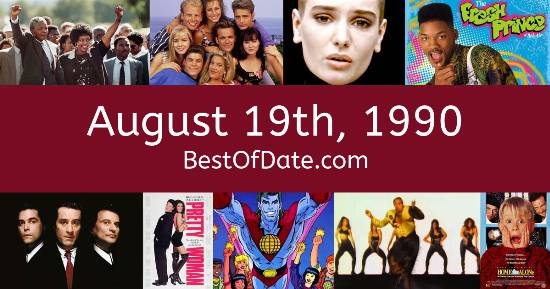 Songs that were on top of the music singles charts in the USA and the United Kingdom on August 19th, 1990:

The date is August 19th, 1990 and it's a Sunday. Anyone born today will have the star sign Leo. Currently, people are enjoying their weekend.

It's summer, so the temperatures are warmer and the evenings are longer than usual. In America, the song Vision Of Love by Mariah Carey is on top of the singles charts. Over in the UK, Turtle Power by Partners in Kryme is the number one hit song.

George W. Bush Snr. is currently the President of the United States and the movie The Exorcist III is at the top of the Box Office. In the United Kingdom, Margaret Thatcher is the current Prime Minister. In fashion, many of the trends from the late 80s are still popular. Colored tights, denim overalls, leotards, flannel shirts and shoulder pads are all fashionable at the moment.

It's 1990, so the airwaves are being dominated by music artists such as Sinéad O'Connor, Paula Abdul, Janet Jackson, Vanilla Ice, Mariah Carey, Stevie B, Madonna and MC Hammer. In the Middle East, Iraqi forces have invaded the neighboring country of Kuwait. The invasion has received widespread condemnation from the international community and the UN Security Council is currently demanding that Saddam Hussein withdraw his forces from the country. On TV, people are watching popular shows such as "Charles in Charge", "Full House", "Roseanne" and "Blossom".

Meanwhile, gamers are playing titles such as "Duck Hunt", "SimCity", "The Revenge of Shinobi" and "Castlevania III: Dracula's Curse". Kids and teenagers are watching TV shows such as "Mister Rogers' Neighborhood", "The Real Ghostbusters", "Doogie Howser, M.D." and "Blossom". If you're a kid or a teenager, then you're probably playing with toys such as "My Little Pony (figures)", "Micro Machines", "Game Boy" and "Sega Genesis / Mega Drive".

Celebrities, historical figures and noteable people who were born on the 19th of August:

Who was the Prime Minister of the United Kingdom on August 19th, 1990?

Enter your date of birth below to find out how old you were on August 19th, 1990.

Looking for some nostalgia? Here are some Youtube videos relating to August 19th, 1990. Please note that videos are automatically selected by Youtube and that results may vary! Click on the "Load Next Video" button to view the next video in the search playlist. In many cases, you'll find episodes of old TV shows, documentaries, music videos and soap dramas.