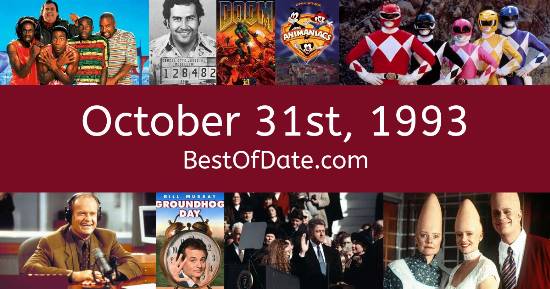 On October 31st, 1993, the following songs were at the top of the music charts in the USA and the UK.

The date is October 31st, 1993, and it's a Sunday. Anyone born today will have the star sign Scorpio. Currently, people are enjoying their weekend.

In America, the song Dream Lover by Mariah Carey is on top of the singles charts. Over in the UK, I'd Do Anything For Love by Meat Loaf is the number one hit song. Bill Clinton is currently the President of the United States, and the movie The Beverly Hillbillies is at the top of the Box Office.

It's 1993, so radio stations are being dominated by the likes of Meat Loaf, UB40, Snow, Haddaway, Whitney Houston, Take That, Janet Jackson and Mariah Carey. In music news, singer Mariah Carey has released her new single "Hero". In baseball, the Toronto Blue Jays have just won the 1993 World Series for the second time in two years after defeating the Philadelphia Phillies by four games to two.

Actor Vincent Price, who was best known for starring in horror films, has passed away from lung cancer at the age of 82. Most recently, Price had played a role in Tim Burton's "Edward Scissorhands" (1990). A stop-motion dark comedy film called "The Nightmare Before Christmas" has just been released in movie theaters. Meanwhile, controversial rap star Tupac Shakur has recently been charged with the shooting of two off-duty policemen in Atlanta, Georgia.

Tributes are currently pouring in for actor River Phoenix, who has died from a drugs overdose at the age of 23. If you were to travel back to this day, notable figures such as River Phoenix, Frank Zappa, Bill Hicks and John Candy would all be still alive. On TV, people are watching popular shows such as "Full House", "Step by Step", "Melrose Place" and "Frasier".

Meanwhile, gamers are playing titles such as "The Legend of Zelda: A Link to the Past", "Super Mario Land 2: 6 Golden Coins", "Tecmo NBA Basketball" and "Bubsy in Claws Encounters of the Furred Kind". Children and teenagers are currently watching television shows such as "Mr. Bean", "Clarissa Explains It All", "Doug" and "Rocko's Modern Life". If you're a kid or a teenager, then you're probably playing with toys such as Super Soaker (water gun), Pogs / Milkcaps, Teen Talk Barbie and Jurassic Park: Young Tyrannosaurus Rex.

These are trending news stories and fads that were prevalent at this time. These are topics that would have been in the media on October 31st, 1993.

News stories, pop culture trends, and other events that happened around October 31st, 1993.

Check out our personality summary for people who were born on October 31st, 1993.

If you are looking for some childhood nostalgia, then you should check out October 31st, 1999, instead.

Celebrities, historical figures, and other notable people who were born on October 31st.

Soccer player.
Born on October 31st, 1997
He was born exactly 4 years after this date.

Singer.
Born on October 31st, 2000
She was born exactly 7 years after this date.

Bill Clinton was the President of the United States on October 31st, 1993.

Find out what your age was on October 31st, 1993, by entering your DOB below.
This information is not saved on our server.

Here are some fun statistics about October 31st, 1993.