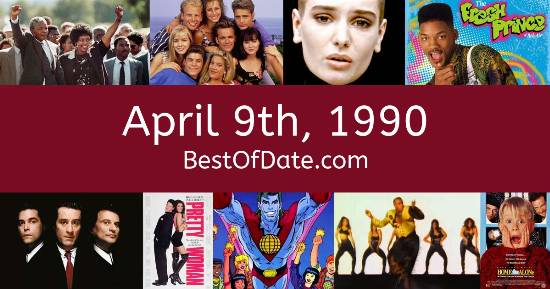 Songs that were on top of the music singles charts in the USA and the United Kingdom on April 9th, 1990:

The date is April 9th, 1990 and it's a Monday. Anyone born today will have the star sign Aries. The summer of 1990 is drawing closer and temperatures have started to rise.

In America, the song I'll Be Your Everything by Tommy Page is on top of the singles charts. Over in the UK, Vogue by Madonna is the number one hit song. George W. Bush Snr. is currently the President of the United States and the movie Pretty Woman is at the top of the Box Office.

The film "Teenage Mutant Ninja Turtles" is currently being shown in movie theaters. A riot is currently taking place at the Strangeways Prison in Manchester, England. Former National Security Advisor John Poindexter has been found guilty of 5 charges relating to his involvement in the Iran-Contra affair.

158 people have tragically lost their lives in a fire that broke out on a ferry travelling between Norway and Denmark. 18-year-old Ryan White has passed away from AIDS after having contracted the disease during a blood transfusion back in 1984. In Europe, the Soviet Union is continuing to dissolve as Communist-controlled Yugoslavia holds its first free elections since 1938.

On TV, people are watching popular shows such as "Columbo.", "Sherlock Holmes", "MacGyver" and "Roseanne". Meanwhile, gamers are playing titles such as "Gain Ground", "SimCity", "Batman: The Video Game" and "Phantasy Star II". Kids and teenagers are watching TV shows such as "Mister Rogers' Neighborhood", "Married... with Children", "Adventures of the Little Koala" and "Nellie the Elephant".

If you're a kid or a teenager, then you're probably playing with toys such as "My Little Pony (figures)", "Popples", "Sega Genesis / Mega Drive" and "Polly Pocket".

Who was the Prime Minister of the United Kingdom on April 9th, 1990?

Enter your date of birth below to find out how old you were on April 9th, 1990.

Looking for some nostalgia? Here are some Youtube videos relating to April 9th, 1990. Please note that videos are automatically selected by Youtube and that results may vary! Click on the "Load Next Video" button to view the next video in the search playlist. In many cases, you'll find episodes of old TV shows, documentaries, music videos and soap dramas.

Here are some fun statistics about April 9th, 1990.