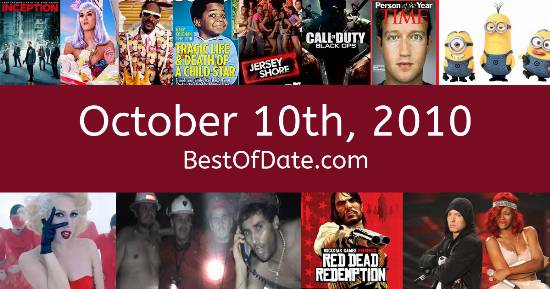 These songs were on top of the music charts in the United States and the United Kingdom on October 10th, 2010.

The date is October 10th, 2010, and it's a Sunday. Anyone born today will have the star sign Libra. Currently, people are enjoying their weekend.

The summer is long gone. Temperatures have started to become much cooler and the evenings are beginning to get darker. Fallen leaves have carpeted driveways, lawns, pathways and sidewalks and there's a fresh earthy scent in the ear. In America, the song Just The Way You Are by Bruno Mars is on top of the singles charts.

Over in the UK, Written In The Stars by Tinie Tempah is the number one hit song. Barack Obama is currently the President of the United States, and the movie The Social Network is at the top of the Box Office. In the United Kingdom, David Cameron is the current Prime Minister.

Pre-made comics called "Rage Comics" are extremely popular on the Internet at the moment, as people use them to share relatable experiences. A photograph of a fan with a cigar and a fake mustache at the 2010 Ryder Cup is currently going viral on the Internet. A new photo-sharing app called Instagram has just been released.

Rescuers in Chile are currently working to release 33 men who have become trapped following a cave-in at a gold and copper mine near the city of Copiapó. The ongoing effort to rescue the miners is receiving widespread media attention. If you were to travel back to this day, notable figures such as Denise Borino-Quinn, Leslie Nielsen, Pete Postlethwaite and Nate Dogg would all be still alive. On TV, people are watching popular shows such as "Grey's Anatomy", "Skins", "Mad Men" and "True Blood".

Meanwhile, gamers are playing titles such as "Uncharted 2: Among Thieves", "Assassin's Creed II", "God of War III" and "Alan Wake". Children and teenagers are currently watching television shows such as "Go, Diego, Go!", "Johnny Test", "Mickey Mouse Clubhouse" and "Team Umizoomi". Popular toys at the moment include the likes of Iggle Piggle, the KidiZoom Camera, ZhuZhu Pets and the iPad.

These are trending news stories and fads that were prevalent at this time. These are topics that would have been in the media on October 10th, 2010.

Check out our personality summary for people who were born on October 10th, 2010.

Television shows that people were watching in October, 2010.

Popular video games that people were playing in October of 2010.

If you are looking for some childhood nostalgia, then you should check out October 10th, 2016 instead.

Singer. Deceased
Born on October 10th, 1959
She was not alive on this date.

Barack Obama was the President of the United States on October 10th, 2010.

Enter your date of birth below to find out how old you were on October 10th, 2010.
This information is not transmitted to our server.

Here are some fun statistics about October 10th, 2010.