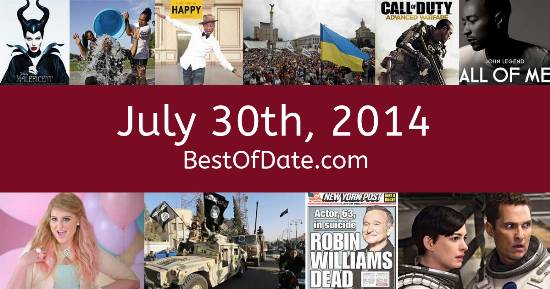 Songs that were on top of the music singles charts in the USA and the United Kingdom on July 30th, 2014:

The date is July 30th, 2014 and it's a Wednesday. Anyone born today will have the star sign Leo. It's summer, so the temperatures are warmer and the evenings are longer than usual.

In America, the song Rude by Magic! is on top of the singles charts. Over in the UK, Me and My Broken Heart by Rixton is the number one hit song. Barack Obama is currently the President of the United States and the movie Lucy is at the top of the Box Office.

An activity called the "Ice Bucket Challenge" is currently going viral on social media at the moment. The activity, which is being done to promote awareness of ALS, involves someone having a bucket of ice water dumped over their head. 283 passengers and 15 crew members have been killed by the downing of Malaysia Airlines Flight 17 over Ukraine. The airline was shot down over an area that is controlled by pro-Russian separatists. People are watching popular TV shows such as "The Vampire Diaries", "White Collar", "American Horror Story" and "House of Cards".

Meanwhile, gamers are playing titles such as "Grand Theft Auto V", "Assassin's Creed IV: Black Flag", "Rust" and "Titanfall". Kids and teenagers are watching TV shows such as "The Fairly OddParents", "Austin & Ally", "Doc McStuffins" and "Every Witch Way". Popular toys include the likes of "The Wii U", "PlayStation 4", "Xbox One" and "Frozen dolls".

Celebrities and historical figures that were born on the 30th of July:

Who was the Prime Minister of the United Kingdom on July 30th, 2014?

Looking for some nostalgia? Here are some Youtube videos relating to July 30th, 2014. Please note that videos are automatically selected by Youtube and that results may vary! Click on the "Load Next Video" button to view the next video in the search playlist. In many cases, you'll find episodes of old TV shows, documentaries, music videos and soap dramas.