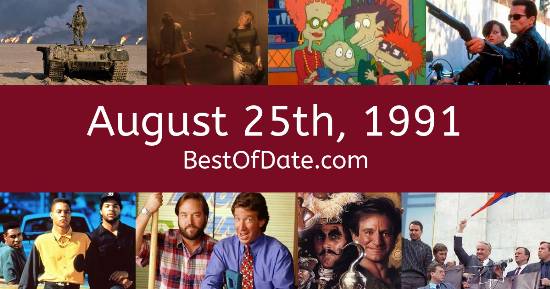 Songs that were on top of the music singles charts in the USA and the United Kingdom on August 25th, 1991:

The date is August 25th, 1991 and it's a Sunday. Anyone born today will have the star sign Virgo. Currently, people are enjoying their weekend.

The summer of 1991 is coming to an end and fall is just around the corner. The song (Everything I Do) I Do It For You by Bryan Adams is on top of the singles charts in both the USA and the United Kingdom. George W. Bush Snr. is currently the President of the United States and the movie Hot Shots! is at the top of the Box Office.

In Europe, the Soviet Union is continuing to dissolve. Russia has restored the white, blue and red tricolour as its national flag. A recent coup attempt against Mikhail Gorbachev by Soviet hardliners has failed. The leaders of the coup have all been arrested in Moscow. Meanwhile, Ukraine, Estonia and Latvia have all recently declared their independence from the USSR. In sports news, a new Formula One driver called Michael Schumacher has recently made his debut for the Jordan-Ford team. On TV, people are watching popular shows such as "Only Fools and Horses", "Cheers", "Star Trek: The Next Generation" and "Beverly Hills, 90210".

Meanwhile, gamers are playing titles such as "Duck Hunt", "Castle of Illusion Starring Mickey Mouse", "Battletoads" and "Streets of Rage". Children and teenagers are currently watching television shows such as "The Cosby Show", "The Real Ghostbusters", "Rosie and Jim" and "Beverly Hills, 90210". If you're a kid or a teenager, then you're probably playing with toys such as "Transformers", "Game Boy", "Polly Pocket" and "G.I. Joe (figures)".

Celebrities, historical figures and noteable people who were born on the 25th of August:

Who was the Prime Minister of the United Kingdom on August 25th, 1991?

Enter your date of birth below to find out how old you were on August 25th, 1991.

Looking for some nostalgia? Here are some Youtube videos relating to August 25th, 1991. Please note that videos are automatically selected by Youtube and that results may vary! Click on the "Load Next Video" button to view the next video in the search playlist. In many cases, you'll find episodes of old TV shows, documentaries, music videos and soap dramas.