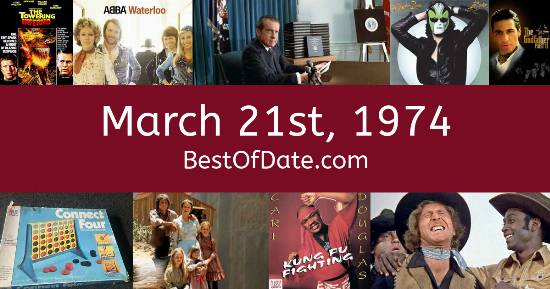 Songs that were on top of the music singles charts in the USA and the United Kingdom on March 21st, 1974.

I had a hernia repair performed on this date. Got along just fine and was able to enjoy all of the good times and memories in my life going forward.
Posted on August 15th, 2021 21:32

The date is March 21st, 1974 and it's a Thursday. Anyone born today will have the star sign Aries. Spring has arrived and the days have become longer.

St. Patrick's Day of 1974 has recently come and gone. In America, the song Dark Lady by Cher is on top of the singles charts. Over in the UK, Billy Don't Be A Hero by Paper Lace is the number one hit song.

Richard Nixon is currently the President of the United States and the movie The Exorcist is at the top of the Box Office. In the United Kingdom, Harold Wilson is the current Prime Minister. Because it's 1974, the music charts are being dominated by the likes of Carl Douglas, ABBA, Mud, the Steve Miller Band, George McCrae and Terry Jacks.

In fashion, the hippie look from the 1960s and early 1970s has disappeared. The disco look is beginning to take off. Women are wearing t-shirts, khaki pants, mood rings, kimonos and flare jumpsuits. Meanwhile, men are wearing velvet sports coats, slogan t-shirts, flannel, frilly shirts, jeans and khaki chinos. If you were to travel back to this day, notable figures such as Oskar Schindler and Eamon de Valera would be still alive. On TV, people are watching popular shows such as "Marcus Welby, M.D.", "The Mary Tyler Moore Show", "McMillan & Wife" and "M*A*S*H".

Meanwhile, gamers are playing titles such as "Pong", "Space Race" and "Gotcha". Children and teenagers are currently watching television shows such as "Captain Kangaroo", "The Brady Bunch", "All in the Family" and "Happy Days". If you're a kid or a teenager, then you're probably playing with toys such as Weebles, Uno (card game), Big Jim (action figure) and Magnavox Odyssey.

If you are looking for some childhood nostalgia, then check out March 21st, 1980 instead.

Soccer player.
Born on March 21st, 1980
He was born exactly 6 years after this date.

Richard Nixon was the President of the United States on March 21st, 1974.

Harold Wilson was the Prime Minister of the United Kingdom on March 21st, 1974.

Enter your date of birth below to find out how old you were on March 21st, 1974.