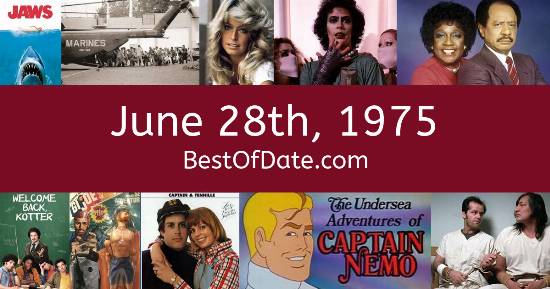 Songs that were on top of the music singles charts in the USA and the United Kingdom on June 28th, 1975.

The date is June 28th, 1975 and it's a Saturday. Anyone born today will have the star sign Cancer. Currently, people are enjoying their weekend.

Steven Spielberg's film "Jaws" is being played in movie theaters at the moment. On TV, people are watching popular shows such as "Last of the Summer Wine", "Happy Days", "Good Times" and "Starsky & Hutch". Meanwhile, gamers are playing titles such as "Pong", "Space Race", "Tank" and "Pursuit".

Kids and teenagers are watching TV shows such as "Sesame Street", "Fat Albert and the Cosby Kids", "Star Trek: The Animated Series" and "Happy Days". If you're a kid or a teenager, then you're probably playing with toys such as Frisbee, Weebles, Evel Knievel Stunt Cycle and Connect Four.

Gerald Ford was the President of the United States on June 28th, 1975.

Harold Wilson was the Prime Minister of the United Kingdom on June 28th, 1975.