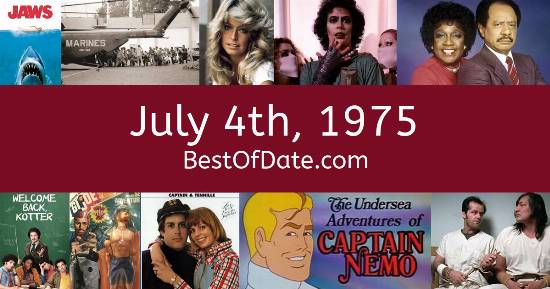 Songs that were on top of the music singles charts in the USA and the United Kingdom on July 4th, 1975:

The date is July 4th, 1975 and it's a Friday. Anyone born today will have the star sign Cancer. Currently, people have "that Friday feeling" and are looking forward to the weekend.

America is celebrating the 4th of July, which means that fireworks are being set off and families are holding barbeques together. It's summer, so the temperatures are warmer and the evenings are longer than usual. In America, the song Love Will Keep Us Together by Captain & Tennille is on top of the singles charts.

Over in the UK, I'm Not In Love by 10cc is the number one hit song. Gerald Ford is currently the President of the United States and Harold Wilson is the Prime Minister of the United Kingdom. In fashion, the hippie look from the 1960s and early 1970s has disappeared. The disco look is beginning to take off. Women are wearing t-shirts, khaki pants, mood rings, kimonos and flare jumpsuits. Meanwhile, men are wearing velvet sports coats, slogan t-shirts, flannel, frilly shirts, jeans and khaki chinos.

Because it's 1975, the music charts are being dominated by the likes of Billy Swan, 10cc, Alain Barriere, Morris Albert, the Salsoul Orchestra, Captain & Tennille, Elton John and David Bowie. Steven Spielberg's film "Jaws" is being played in movie theaters at the moment. On TV, people are watching popular shows such as "What's My Line?", "The Mary Tyler Moore Show", "Upstairs, Downstairs" and "Starsky & Hutch".

Meanwhile, gamers are playing titles such as "Space Race", "Gotcha", "Tank" and "Pursuit". Kids and teenagers are watching TV shows such as "The Bugs Bunny Show", "Sesame Street", "Fat Albert and the Cosby Kids" and "Star Trek: The Animated Series". Popular toys include the likes of "Lite-Brite", "Battleship (game)", "Uno (card game)" and "Baby Alive (doll)".

Celebrities, historical figures and noteable people who were born on the 4th of July:

Who was the Prime Minister of the United Kingdom on July 4th, 1975?

Enter your date of birth below to find out how old you were on July 4th, 1975.

Looking for some nostalgia? Here are some Youtube videos relating to July 4th, 1975. Please note that videos are automatically selected by Youtube and that results may vary! Click on the "Load Next Video" button to view the next video in the search playlist. In many cases, you'll find episodes of old TV shows, documentaries, music videos and soap dramas.

Here are some fun statistics about July 4th, 1975.