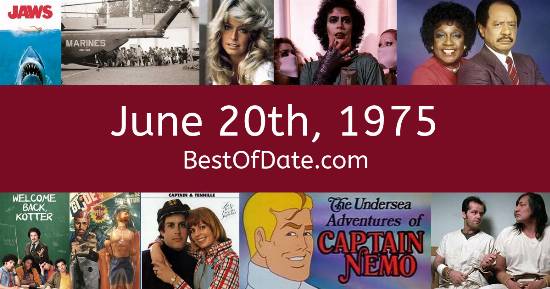 Songs that were on top of the music singles charts in the USA and the United Kingdom on June 20th, 1975:

The date is June 20th, 1975 and it's a Friday. Anyone born today will have the star sign Gemini. Currently, people have "that Friday feeling" and are looking forward to the weekend.

It's summer, so the temperatures are warmer and the evenings are longer than usual. In America, the song Love Will Keep Us Together by Captain & Tennille is on top of the singles charts. Over in the UK, Whispering Grass by Windsor Davies & Don Estelle is the number one hit song.

Steven Spielberg's film "Jaws" is being played in movie theaters at the moment. On TV, people are watching popular shows such as "What's My Line?", "All in the Family", "Maude" and "Barnaby Jones". Meanwhile, gamers are playing titles such as "Pong", "Space Race", "Gotcha" and "Tank".

Children and teenagers are currently watching television shows such as "Captain Kangaroo", "All in the Family", "Fat Albert and the Cosby Kids" and "Star Trek: The Animated Series". Popular toys include the likes of "Etch A Sketch", "Uno (card game)", "Shrinky Dinks" and "Connect Four".

Celebrities, historical figures and noteable people who were born on the 20th of June:

Who was the Prime Minister of the United Kingdom on June 20th, 1975?

Looking for some nostalgia? Here are some Youtube videos relating to June 20th, 1975. Please note that videos are automatically selected by Youtube and that results may vary! Click on the "Load Next Video" button to view the next video in the search playlist. In many cases, you'll find episodes of old TV shows, documentaries, music videos and soap dramas.