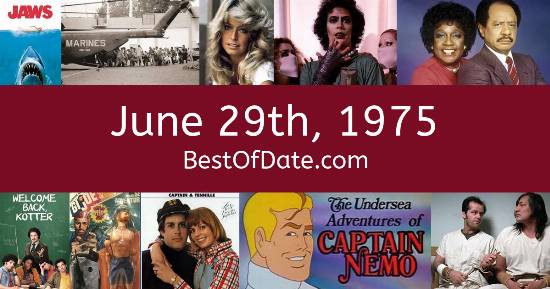 Songs that were on top of the music singles charts in the USA and the United Kingdom on June 29th, 1975.

The date is June 29th, 1975 and it's a Sunday. Anyone born today will have the star sign Cancer. Currently, people are enjoying their weekend.

Steven Spielberg's film "Jaws" is being played in movie theaters at the moment. On TV, people are watching popular shows such as "McMillan & Wife", "Emergency!", "Happy Days" and "The Rockford Files". Meanwhile, gamers are playing titles such as "Pong", "Space Race", "Gotcha" and "Pursuit".

Kids and teenagers are watching TV shows such as "The Bugs Bunny Show", "The Pink Panther Show", "All in the Family" and "The New Adventures of Gilligan". If you're a kid or a teenager, then you're probably playing with toys such as Battleship (game), Uno (card game), Big Jim (action figure) and Dungeons & Dragons.

If you are looking for some childhood nostalgia, then check out June 29th, 1981 instead.

Gerald Ford was the President of the United States on June 29th, 1975.

Harold Wilson was the Prime Minister of the United Kingdom on June 29th, 1975.