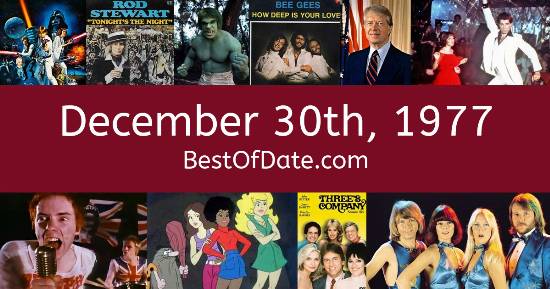 Songs that were on top of the music singles charts in the USA and the United Kingdom on December 30th, 1977.

The movie "Close Encounters of the Third Kind" was at the top of the box office on December 30th, 1977.

The date is December 30th, 1977 and it's a Friday. Anyone born today will have the star sign Capricorn. Currently, people have "that Friday feeling" and are looking forward to the weekend.

Christmas Day of 1977 has just passed and many people are relaxing at home and enjoying the holiday season. In America, the song How Deep Is Your Love by The Bee Gees is on top of the singles charts. Over in the UK, Mull Of Kintyre / Girls School by Wings is the number one hit song.

Because it's 1977, the music charts are being dominated by the likes of The Eagles, Donna Summer, Wings, Boney M, Baccara, Stevie Wonder, Barbra Streisand and Debby Boone. "Saturday Night Fever", starring John Travolta, is currently being played in movie theaters. If you were to travel back to this day, notable figures such as Keith Moon would be still alive.

On TV, people are watching popular shows such as "Maude", "Good Times", "The Rockford Files" and "Fawlty Towers". Meanwhile, gamers are playing titles such as "Pursuit", "Gun Fight" and "Breakout". Children and teenagers are currently watching television shows such as "The Pink Panther Show", "Scooby-Doo, Where Are You!", "Schoolhouse Rock!" and "Captain Caveman and the Teen Angels".

If you're a kid or a teenager, then you're probably playing with toys such as VertiBird (toy helicopter), Mattel Electronic Football (handheld game), Star Wars action figures and the Atari 2600.

If you are looking for some childhood nostalgia, then check out December 30th, 1983 instead.

Basketball player.
Born on December 30th, 1984
He was born exactly 7 years after this date.

Singer.
Born on December 30th, 1986
She was born exactly 9 years after this date.

Jimmy Carter was the President of the United States on December 30th, 1977.

James Callaghan was the Prime Minister of the United Kingdom on December 30th, 1977.

Enter your date of birth below to find out how old you were on December 30th, 1977.

Here are some fun statistics about December 30th, 1977.