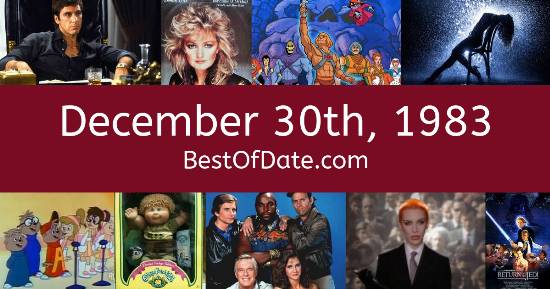 Songs that were on top of the music singles charts in the USA and the United Kingdom on December 30th, 1983:

The date is December 30th, 1983 and it's a Friday. Anyone born today will have the star sign Capricorn. Currently, people have "that Friday feeling" and are looking forward to the weekend.

Christmas Day of 1983 has just passed and many people are relaxing at home and enjoying the holiday season. In America, the song Say Say Say by Paul McCartney & Michael Jackson is on top of the singles charts. Over in the UK, Only You by Flying Pickets is the number one hit song.

Ronald Reagan is currently the President of the United States and the movie Terms of Endearment is at the top of the Box Office. In the United Kingdom, Margaret Thatcher is the current Prime Minister. In fashion, women are currently wearing jelly shoes, turtleneck sweaters, loose high-waist pants, crop tops and puffer jackets lined with fur. Meanwhile, men have been ditching the disco look of the 70s in favor of athletic clothing such as tracksuits and sports jerseys. The "preppy" look has also been making a comeback.

Because it's 1983, the radio stations are being dominated by artists such as Culture Club, Michael Jackson, Irene Cara, David Bowie and The Police. People are watching popular TV shows such as "Last of the Summer Wine", "The Love Boat", "Knight Rider" and "The A-Team". Meanwhile, gamers are playing titles such as "Space Invaders", "Missile Command", "Donkey Kong" and "Mario Bros.".

Kids and teenagers are watching TV shows such as "The Bugs Bunny Show", "Cockleshell Bay", "He-Man and the Masters of the Universe" and "Dungeons & Dragons". Popular toys include the likes of "Hungry Hungry Hippos", "Cabbage Patch Kids", "Snoopy Sno-Cone Machine" and "Intellivision (games console)".

Celebrities and historical figures that were born on the 30th of December:

Who was the Prime Minister of the United Kingdom on December 30th, 1983?

Enter your date of birth below to find out how old you were on December 30th, 1983.

Looking for some nostalgia? Here are some Youtube videos relating to December 30th, 1983. Please note that videos are automatically selected by Youtube and that results may vary! Click on the "Load Next Video" button to view the next video in the search playlist. In many cases, you'll find episodes of old TV shows, documentaries, music videos and soap dramas.

Here are some fun statistics about December 30th, 1983.