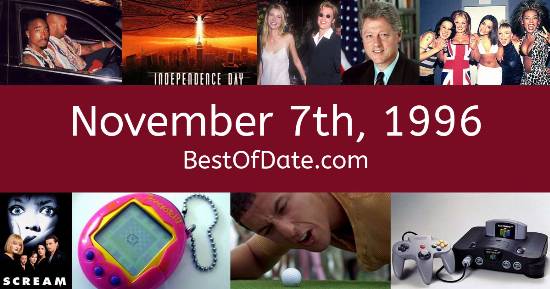 Songs that were on top of the music singles charts in the USA and the United Kingdom on November 7th, 1996.

The date is November 7th, 1996 and it's a Thursday. Anyone born today will have the star sign Scorpio. It's November, so the evenings are getting darker and the days are getting colder.

A new video game console called the "Nintendo 64" has just been released. It is currently competing against the Sony PlayStation and the Sega Saturn. On TV, people are watching popular shows such as "Melrose Place", "Ellen", "Hercules: The Legendary Journeys" and "Sabrina, the Teenage Witch". Meanwhile, gamers are playing titles such as "Resident Evil", "Die Hard Trilogy", "Tomb Raider" and "Command & Conquer: Red Alert".

Children and teenagers are currently watching television shows such as "Married... with Children", "The Simpsons", "Tales from the Cryptkeeper" and "Aaahh!!! Real Monsters". If you're a kid or a teenager, then you're probably playing with toys such as G.I. Joe (figures), Nerf Blaster, 12" talking Buzz Lightyear Action Figure and the Tamagotchi.

Celebrities, historical figures and notable people who were born on the 7th of November.

Bill Clinton was the President of the United States on November 7th, 1996.

John Major was the Prime Minister of the United Kingdom on November 7th, 1996.

Enter your date of birth below to find out how old you were on November 7th, 1996.

Here are some fun statistics about November 7th, 1996.

Leave a comment and tell everyone why November 7th, 1996 is important to you.