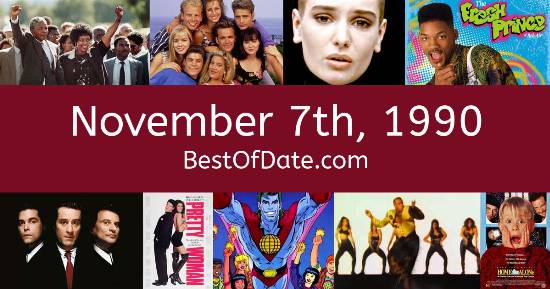 These songs were on top of the music charts in the United States and the United Kingdom on November 7th, 1990.

The date is November 7th, 1990, and it's a Wednesday. Anyone born today will have the star sign Scorpio. It's November, so the evenings are getting darker and the days are getting colder.

In America, the song Love Takes Time by Mariah Carey is on top of the singles charts. Over in the UK, Unchained Melody by Righteous Brothers is the number one hit song. George W. Bush Snr. is currently the President of the United States, and the movie Jacob's Ladder is at the top of the Box Office.

In Europe, the Soviet Union is continuing to dissolve. Mary Robinson has become the first female President of Ireland after defeating Brian Lenihan and Austin Currie in the 1990 Irish presidential election. If you were to travel back to this day, notable figures such as Roald Dahl, John Bardeen, Miles Davis and Freddie Mercury would all be still alive.

On TV, people are watching popular shows such as "Cheers", "Who's the Boss?", "Charles in Charge" and "In the Heat of the Night". Meanwhile, gamers are playing titles such as "Herzog Zwei", "Castlevania III: Dracula's Curse", "Super Mario World" and "Wing Commander". Kids and teenagers are watching TV shows such as "Mister Rogers' Neighborhood", "Danger Mouse", "Pingu" and "Fireman Sam".

If you're a kid or a teenager, then you're probably playing with toys such as Mr Frosty, the Nintendo Entertainment System, Polly Pocket and Lego Pirates.

These are trending news stories and fads that were prevalent at this time. These are topics that would have been in the media on November 7th, 1990.

News stories and other events that happened around November 7th, 1990.

Check out our personality summary for people who were born on November 7th, 1990.

If you are looking for some childhood nostalgia, then you should check out November 7th, 1996 instead.

Singer.
Born on November 7th, 1996
She was born exactly 6 years after this date.

Soccer player.
Born on November 7th, 2000
He was born exactly 10 years after this date.

George W. Bush Snr. was the President of the United States on November 7th, 1990.

Margaret Thatcher was the Prime Minister of the United Kingdom on November 7th, 1990.

Find out what your age was on November 7th, 1990, by entering your DOB below.
This information is not saved on our server.

Here are some fun statistics about November 7th, 1990.