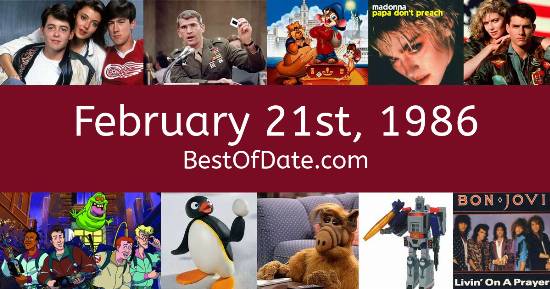 These songs were on top of the music charts in the United States and the United Kingdom on February 21st, 1986.

The top "Box Office" movie on this date was the film "Down and Out in Beverly Hills".

The date is February 21st, 1986, and it's a Friday. Anyone born today will have the star sign Pisces. Currently, people have "that Friday feeling" and are looking forward to the weekend.

In America, the song How Will I Know by Whitney Houston is on top of the singles charts. Over in the UK, When The Going Gets Tough The Tough Get Going by Billy Ocean is the number one hit song. Ronald Reagan is currently the President of the United States, and the movie Down and Out in Beverly Hills is at the top of the Box Office.

If you were to travel back to this day, notable figures such as Len Bias, Cliff Burton, Gia Carangi and Liberace would all be still alive. On TV, people are watching popular shows such as "Dallas", "Sherlock Holmes", "The Cosby Show" and "MacGyver". Meanwhile, gamers are playing titles such as "Asteroids", "Donkey Kong", "Boulder Dash" and "Back to the Future".

Children and teenagers are currently watching television shows such as "The Smurfs", "Fraggle Rock", "Snorks" and "Jem and the Holograms". If you're a kid or a teenager, then you're probably playing with toys such as Speak & Spell, Fischer Price cassette player, Space Lego and Teddy Ruxpin.

These are trending news stories and fads that were prevalent at this time. These are topics that would have been in the media on February 21st, 1986.

News stories and other events that happened around February 21st, 1986.

Check out our personality summary for people who were born on February 21st, 1986.

Television shows that people were watching in February, 1986.

Popular video games that people were playing in February of 1986.

If you are looking for some childhood nostalgia, then you should check out February 21st, 1992 instead.

Actor.
Born on February 21st, 1987
He was born exactly one year after this date.

Soccer player.
Born on February 21st, 1991
He was born exactly 5 years after this date.

Ronald Reagan was the President of the United States on February 21st, 1986.

Margaret Thatcher was the Prime Minister of the United Kingdom on February 21st, 1986.

Find out what your age was on February 21st, 1986, by entering your DOB below.
This information is not saved on our server.

Here are some fun statistics about February 21st, 1986.