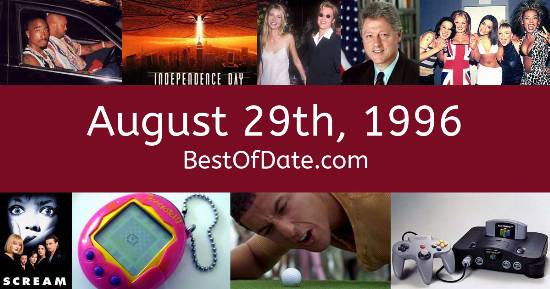 On August 29th, 1996, the following songs were at the top of the music charts in the USA and the UK.

The top "Box Office" movie on this date was the film "Island of Dr. Moreau".

The date is August 29th, 1996, and it's a Thursday. Anyone born today will have the star sign Virgo. The summer of 1996 is coming to an end and fall is just around the corner.

In America, the song Macarena by Los Del Rio is on top of the singles charts. Over in the UK, Wannabe by Spice Girls is the number one hit song. Bill Clinton is currently the President of the United States, and the movie Island of Dr. Moreau is at the top of the Box Office.

Everyone and their grandmother is buying a new "virtual pet" called the Tamagotchi. A new dance craze called the "Macarena" is all the rage at the moment. If you were to travel back to this day, notable figures such as Tupac Shakur, Yaki Kadafi, Tiny Tim and Carl Sagan would all be still alive.

On TV, people are watching popular shows such as "Last of the Summer Wine", "One Foot in the Grave", "The X-Files" and "Ellen". Meanwhile, gamers are playing titles such as "Rayman", "Twisted Metal", "Resident Evil" and "Die Hard Trilogy". Children and teenagers are currently watching television shows such as "Art Attack", "Street Sharks", "Gargoyles" and "Hang Time".

If you're a kid or a teenager, then you're probably playing with toys such as Jenga, the SEGA Game Gear, Super Soaker (water gun) and the Tamagotchi.

These are trending news stories and fads that were prevalent at this time. These are topics that would have been in the media on August 29th, 1996.

News stories and other events that happened around August 29th, 1996.

Check out our personality summary for people who were born on August 29th, 1996.

Television shows that people were watching in August, 1996.

Popular video games that people were playing in August of 1996.

If you are looking for some childhood nostalgia, then you should check out August 29th, 2002 instead.

Bill Clinton was the President of the United States on August 29th, 1996.

John Major was the Prime Minister of the United Kingdom on August 29th, 1996.

Find out what your age was on August 29th, 1996, by entering your DOB below.
This information is not saved on our server.